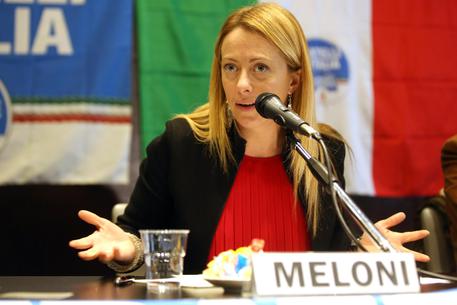 (ANSA) - Rome, March 14 - Centre-right Rome mayor candidate Guido Bertolaso came under fire on Monday for saying that Giorgio Meloni, the pregnant leader of the right-wing Brothers of Italy (FdI) party, should concentrate on being a mum after ruling out sharing the ticket with her in Rome's local elections in June. Bertolaso spoke about Meloni with his position as mayoral candidate weakened after Northern League leader Matteo Salvini pulled his support for the former civil protection chief. Salvini wants Meloni to be the centre-right candidate and she has said she is willing to stand.
"Meloni must do the job of being a mum," Bertolaso, whose candidacy was proposed by ex-premier and Forza Italia (FI) leader Silvio Berlusconi, told La7 television on Sunday. "It seems to me to be the most beautiful thing that can happen to a woman. She has to handle this chapter of her life. "I don't see why someone should force her to do a ferocious election campaign and take care of holes (in roads) and dirtiness while she is breast feeding".
Meloni said Monday that it was possible to reconcile work with maternity.
"I say to Guido Bertolaso, with courtesy and pride, that I hope to be an excellent mother, like all those women who manage to reconcile professional commitments and maternity amid a thousand difficulties, often in conditions more difficult than mine," she said.
Alfio Marchini, an independent candidate to be Rome mayor, said even he would vote for Meloni if Bertolaso repeated the attack.
"Another two attacks on the mamma Meloni and I'll vote for her," Marchini, who was briefly touted as a possible candidate behind whom the centre right could unite, said via Twitter.
"Countries with higher birth rates? Where there's greater female employment!".
Bertolaso tried to deflate the row, saying on Twitter that "I never said maternity precludes goals".
But he also said that he would l "draw the conclusions" if Giorgia Meloni decides to stand. He added that he would be "the happiest man in the world" if Berlusconi decided to drop his support for him and back Meloni instead. "I'd go back to taking care of poor and ill children in Africa," he added. Bertolaso had expressed satisfaction after winning a poll of centre-right supporters last weekend about who should be the mayor candidate. The poll was organised to reinforce Bertolaso's position after Salvini withdrew his support. Organizers said Bertolaso won over 96% of the close to 50,000 votes cast, although there were reports of some people voting many times at different stations. "More Romans came (to the centre-right poll) than those who went to the primaries of the PD (Premier Matteo Renzi's Democratic Party)," Bertolaso said. "The numbers say so. We were almost at the 50,000 mark".
Virginia Raggi, the anti-establishment 5-Star Movement's candidate to be Rome mayor, said that it was possible to be a mum and the capital's first citizen. "Of course I can (be mayor and mum), just like all working mothers, I'll bend over backwards," said Raggi, who has a small child. "I'm ready and we are ready to govern Rome. More public transport vehicles, more security, more money for schools. A city that functions is not left-wing or right-wing, it's a 5-Star city". Premier and Democratic Party (PD) leader Matteo Renzi, meanwhile, played down tensions within his party, saying they would be sorted out at next Monday's meeting of the party's executive "and above all in the 2017 party congress".
He said the internal debate in the PD, like other parties "seems surreal" compared with all the problems in Europe and the world. "To my comrades in the party who pose great problems on the strategic vision of the left, in Italy and the world, I set a date for next Monday in the executive and above all the 2017 congress," he said in his e-news.