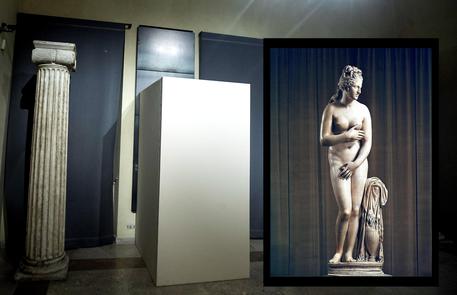 (By Denis Greenan).
(ANSA) - Rome, January 27 - Premier Matteo Renzi was not informed of a cover-up of nude statues for Iranian President Hassan Rouhani's Rome visit that has sparked scorn from government critics and amusement in the international media, Culture Minister Dario Franceschi said Wednesday.
Franceschini said that the controversial decision to cover up the nude statues at Rome's Capitoline Museums during Rouhani's visit was "incomprehensible". He added that neither he nor Renzi had been informed of the decision to cover the statues. "I think other ways could easily have been found to avoid going against the sensibilities of such an important guest, without this incomprehensible decision to cover the statues," Franceschini said after accompanying Rouhani on a visit to the Colosseum before the president flew on to Paris. The move to cover up the nudes was apparently made as a form of respect for Iranian culture. It has hit the headlines worldwide and prompted astonishment and ridicule within Italy. Rome's Culture Superintendency on Wednesday said it was not behind the move and said that the premier's office organised Rouhani's visit to the Capitoline Museums. "You must ask the premier's office about the covered statues at the Capitoline Museums during Iranian President Rouhani's visit," the Superintendency said. "The move was not decided by us. It (the visit) was organised by the premier's office, not by us".
The premier's office said later it had opened an internal investigation to ascertain responsibilities in the organization of the visit.
Rouhani dismissed the controversy over the nude statues as a "journalistic issue" on Wednesday. "There were no talks about this," Rouhani told a press conference when asked about the statues covered up at Rome's Capitoline Museums when he visited on Monday. "All I can say is that Italian people are very hospitable.
"They try to do everything to put you at ease and I thank you for this".
Meanwhile critical reactions continued Wednesday.
Renato Brunetta, the Lower House whip for Silvio Berlusconi's centre-right opposition Forza Italia party, said Renzi was "ridiculous".
"Renzi says defence and culture (to combat terror)," Brunetta said. "Covering the statues in the Capitoline Museum - is that culture? Is that defence of culture, of our history? Renzi is ridiculous".
The Codacons consumer association said whoever decided to cover up the statues should be sacked.
"They seriously damaged the honor and image of Rome and the whole of Italy," Codacons said in a statement, adding it will sue in the Audit Court for the expenses of covering the statues to be charged to the decision-makers and not the taxpayers.
Also on Wednesday, the House and Senate caucuses of the anti-establishment, anti-euro 5-Star Movement (M5S) said they will put a parliamentary question to the government over the statues.
"All they had to do, if they wanted to respect the modesty and morality of President Rouhani and the Iranian people, was change the itinerary," the caucuses said in a statement. "Instead, the... government opted to prostrate itself".
Amusement and puzzlement continued to mark international coverage of the cover-up.
The British press had a field day, eliciting a satirical editorial by the Times in which Rouhani and Pope Francis engage in an imagined chat over the propriety of covering the nudes.
The German press was perplexed, with well-known Bild columnist Franz Josef Wagner calling the decision "like saying to your relatives: I don't know you".
Articles across the German press highlighted the incongruent fact that although Rouhani was in Rome to sign important business accords, the decision to cover the statues was based on the Iranian guests' religion.
"Are we back in 1546?" wrote Wagner, referring to Catholic censorship of Michelangelo's work.
German daily Die Welt called the decision "debatable", while Sueddeutsche Zeitung said it was "false modesty" and that covering the statues was "wrong".
"There are things for which Europe should be ashamed. Its art is not one of them," said Sueddeutsche Zeitung.