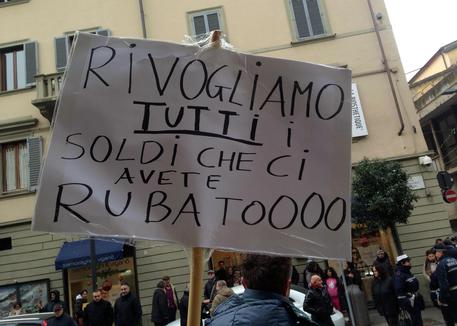 (ANSA) - Arezzo, December 28 - Scores of savings account holders who lost their money with scandal-hit Banca Etruria protested outside its head office in this Tuscan provincial capital Monday.
Waving banners with slogans such as "we want back all the money you stole", some 50 people gathered in Arezzo on a cold, foggy morning to protest what they say is a "fraud" perpetrated against them.
Banca Etruria is one of four Italian lenders saved by a controversial government rescue, and is being probed for fraud and instigation to commit suicide after pensioner Luigino D'Angelo - who lost 100,000 euros in now worthless Banca Etruria subordinated bonds- hung himself in November.
The banks' rescue has rocked the government, above all because Reform Minister Maria Elena Boschi's father is a former vice president of Banca Etruria.
She survived a vote on a no-confidence motion this month but the centre-right has presented similar petitions against the government over the case. The 3.6-billion euro rescue, financed by healthy Italian banks, saved jobs and protected account holders, but shares and bonds in the four lenders are now worthless.
The government has put Italy's anti-corruption agency in charge of arbitrating claims for compensation from small investors, who say they were deceived by the banks about the risks of the bonds.
The government has said it could not do any more because the European Commission warned that offering greater protection to bondholders would breach of EU rules against State aid. The Commission has denied this, but Premier Matteo Renzi's government is reportedly considering releasing a confidential letter from Brussels showing that the EC set limits on Rome's room for manoeuvre.