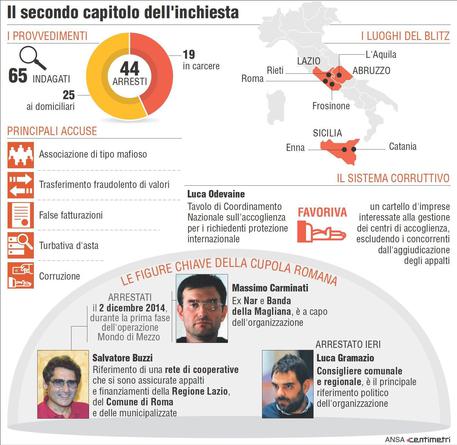 (by Stefania Fumo).(ANSA) - Rome, June 5 - Agriculture Undersecretary Giuseppe Castiglione, a member of the New Centre Right (NCD) party, is among six people under investigation by Catania prosecutors for alleged bid-rigging related to the Cara di Mineo migrant reception centre in Sicily.
The probe is an offshoot of the so-called Mafia Capitale investigation in Rome, the last chapter of which saw 44 people arrested on Thursday for alleged involvement in the plundering of public money destined for migrant reception centres. "For the second time in six months, I find out through the press that I may be probed for alleged involvement in the Cara di Mineo affair," Castiglione said. "I have not received any notification that I am under investigation".
La Cascina managers Domenico Cammissa, Salvatore Menolascina, Carmelo Parabita and Francesco Ferrara are all under arrest for allegedly promising a 10,000-euro monthly "stipend" to Luca Odevaine - former deputy head of cabinet of ex-center-left Rome mayor Walter Veltroni - in exchange for "subjugating his function as a public official" to the interests of the La Cascina cooperative, which manages the Cara di Mineo migrant reception center. In the capital, meanwhile, a preliminary investigations judge began questioning the suspects arrested on Thursday. These included Mirko Coratti, the former Rome council assembly president from the center-left Democratic Party (PD) of Premier Matteo Renzi, and Daniele Ozzimo, a former member of PD Rome Mayor Ignazio Marino's city executive. "I have committed no crime and I especially have never had any illicit relationship with Salvatore Buzzi," Coratti told the judge.
"There is no evidence we ever spoke on the phone". Coratti stepped down in November last year after being placed under investigation along with some 100 others in the probe into an alleged mafia organisation that prosecutors said rigged public contracts in Rome. The crime syndicate was allegedly led by former rightwing terrorist and gangster Massimo Carminati - who is behind bars - and was made up of businessmen, politicians, and high-level officials. Carminati and his suspected right-hand man Salvatore Buzzi - whom prosecutors say acted as a go-between, connecting the gangster with the politicians - were arrested last year in a sweep that netted more than three dozen suspects in the so-called Mafia Capitale case. Former center-right mayor Gianni Alemanno is among those under investigation.