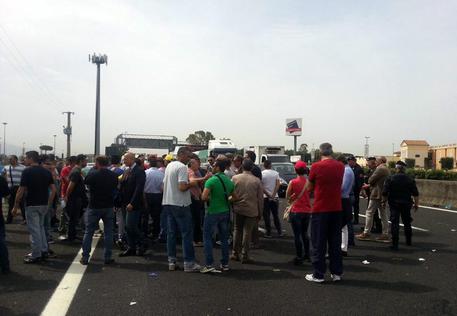 (ANSA) - Caserta, May 6 - Unionized workers blocked a major highway between Rome and Naples near Caserta Wednesday to protest proposed job cuts from a Whirlpool manufacturing plant, union UILM said.
Giovanni Sgambati, secretary general for the union in Campania, said about 400 demonstrators took part in the protest, one day before meetings on the manufacturer's plans for Italy resume at the industry ministry.
The Italian government has brokered meetings between unions and the international manufacturer of household appliances over the company's strategic plan that reportedly includes closure of a Caserta plant.
Last month, unions staged blockades at warehouses and highways in the Naples area to protest the cuts and ask for government intervention.
Industry Minister Federica Guidi said in a statement Wednesday that she "understands the concern and anger of workers" given what is at stake.
She said the government has asked the company to carefully review its plans with an eye to safeguarding jobs.
"Each party is called to the table with a high sense of responsibility towards the objective of a successful outcome for negotiations," Guidi's statement said. The ministry has said it had "strong opposition to aspects" of Whirlpool's plans which one union said may involve 1,350 job cuts as a result of its takeover last year of Italy's Indesit.
Last July, Whirlpool bought control of the Italian home-appliance maker in a deal permitting layoffs and a move from Caserta.
Whirlpool said last month that it plans to invest 500 million euros in Italian operations over four years.
But UILM has said that company also plans to close its Indesit plant in Caserta.
The deal signed at the time of the takeover by UILM, FIM and UGL as well as Italian local and central governments was aimed at avoiding 1,425 lay-offs and ensuring 83 million euros worth of investments.
But trade federation FIOM-CGIL warned then that the deal would compromise jobs in future.
FIOM-CGIL objected in particular to a part of that July agreement allowing Indesit to move clothes-washing machine production away from its current location at the southern Italian city of Caserta, and replace it with stove production taken from another Italian plant located in Melano, east of Ancona.