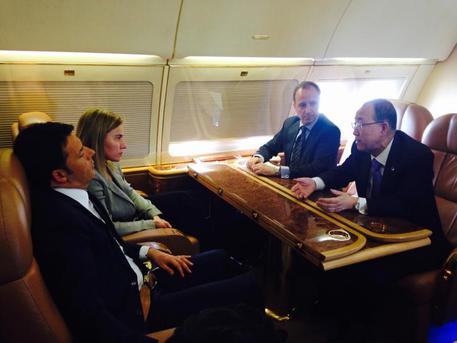 (ANSA) - Rome, April 27 - Premier Matteo Renzi said after visiting the Navy's San Giusto ship with United Nations Secretary-General Ban Ki-moon Monday that halting people smugglers is a top priority. "Stopping human traffickers in order to prevent a humanitarian catastrophe is an absolute priority, and we count on UN support for this," the premier said. "Italy once faced the issue of migration in the Mediterranean alone, now the entire international community is aware that this is a global problem and not the problem of just one country".
Italy has proven itself generous after the October 3, 2013 shipwreck off the Sicilian island of Lampedusa that took the lives of 366 African migrants, Renzi said.
"But we must raise our voices on the international level, in Europe and in the UN," the premier added.
"This is our strategy. We have been alone in the past, now we see something is finally moving".
The premier earlier met with Ban and EU High Foreign Representative Federica Mogherini on board the San Giusto, which has been deployed on search-and-rescue missions in the Mediterranean.

Ban told Renzi that the priority in the Mediterranean migrant emergency was to save lives, the UN said Monday. After discussing his "concerns" on the crisis with Renzi and EU High Representative for Foreign Affairs Federica Mogherini, Ban stressed that "the authorities must focus on saving lives," a UN spokesperson said. The UN secretary-general met with Renzi and Mogherini aboard the San Giusto vessel of the Italian Navy, involved in search and rescue operations in the Strait of Sicily. "I want to physically show him what Italy is doing", Renzi said before the meeting.. Italian vessels, together with those of Triton and private merchant ships, are dealing with the emergency caused by mass departures from Libya with over 25,000 people reported to have landed this year. Rome has obtained from the EU summit a three-fold increase of funding devoted to operations by European border agency Frontex and an exploratory mandate awarded to Mogherini for a European mission to identify and destroy boats before they are used by human traffickers. The latter is one of the most delicate issues at stake, on which the involvement of the UN is necessary. Italy, Renzi confirmed over the past few days, "has asked France, Great Britain and Spain for support in a UN resolution on Libya". The resolution would be aimed at giving coverage to what has been defined not as military intervention but as an "international police operation" aimed at destroying vessels used by human traffickers. Another key part of the Italian strategy is the involvement of countries of origin and transit of migration where centers to process would-be migrants to determine who has a right to be welcomed by Europe could be set up. In this case as well, the involvement of the UN through the UNHCR would be key. Ban for his part, in a couple of interviews, has stressed his opposition to military intervention in Libya. He has noted that it is crucial for everybody to focus on saving lives, including in the Libyan area of search and rescue operations, and to ensure the asylum rights of the growing number of people fleeing war worldwide. Ban has also noted that there are "no alternatives" to dialogue on Libya. Special UN representative Bernardino Leon and his team are continuing to work with the Libyan sides involved to help them reach together a spirit of compromise, he has added.