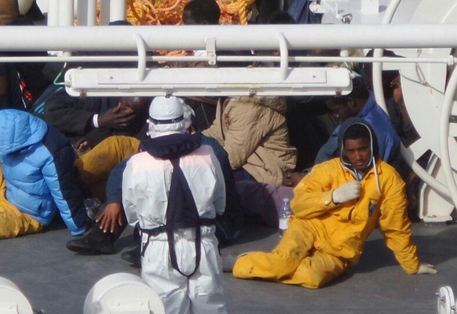 (ANSA) - Rome, April 20 - Premier Matteo Renzi on Monday said that the weekend's migrant-boat disaster in which as many as 900 people are feared to have died shows the Mediterranean is facing a massive humanitarian crisis.

"What has been happened over the last few hours in the Mediterranean is much more than a wreck," Renzi told a joint news conference with Maltese Prime Minister Joseph Musca. "We are faced with a serious time of humanitarian crisis that should be addressed as such".

Earlier on Monday Renzi said ''a joint operation against smugglers is possible in Europe but it must be targeted'', in an interview with Rtl radio in the wake of the migrant-boat wreck.

Renzi reiterated repeated calls for the EU to do more.

"If they hold dear the destinies of human beings, they cannot accept that they should be forced into atrocious deaths, closed in a cargo hold," he said.

British Prime Minister David Cameron tweeted Monday that he "supported" Italian Premier Matteo Renzi's "call for an emergency meeting of EU leaders to find a comprehensive solution" to the migrant crisis in the Mediterranean.

Italian Coast Guard vessel Bruno Gregoretti arrived at the Maltese port of Valletta on Monday, carrying 24 bodies and 27 out of the 28 survivors of the disaster off the Libyan coast believed to have caused between 700 to 900-plus victims.

Right after the bodies of victims were taken ashore and survivors underwent a medical checkup, the Gregoretti was scheduled to leave for the Sicilian city of Catania, where one of the migrants who survived, a Bangladeshi national, was taken by helicopter. He told authorities that some 950 migrants were on the boat that capsized.
Italian Foreign Minister Paolo Gentiloni said Monday that it was unsustainable for the European Union to leave Italy alone in managing the Mediterranean migrant crisis. "This is a European emergency and, up to now, the responses, commitments and rescues have been Italian," Gentiloni said ahead of a meeting of EU foreign ministers. "A situation in which the only responses to a European emergency are Italian ones is no longer sustainable.

"The reputation of the EU is at stake. The tragedy of the other night makes even more evident what many people have said.
"Responses are needed and responses that require mayor commitments".

The French government said Monday that the European Union has failed over the Mediterranean migrant crisis, adding that Italy should no longer be left alone to cope with it after last weekend's migrant disaster. "We have not been up to the situation regarding this tragedy," said French Agriculture Minister and Government Spokesman Stephane Le Foll. "It's necessary to increase surveillance in the Mediterranean... There has been collective acknowledgement that we cannot leave Italy alone on an issue like this".

EU sources said that the biggest-ever Mediterranean disaster was a "game changer" and that "clear and substantive" moves were needed and pointing fingers had to stop.

Meanwhile, a Palermo prosecutor who helped bust a major people trafficking ring said Monday that "around a million migrants are ready to leave for Europe". "There is an unstoppable traffic in people," said Palermo assistant prosecutor Maurizio Scala.