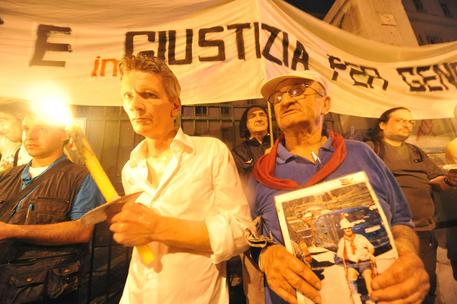 (ANSA) - Rome, April 8 - The Italian government's response to alleged official silence over police brutality during a Group of Eight summit in Genoa that earned Italy a European court's 'torture' conviction Tuesday is a new anti-torture law, Premier Matteo Renzi said Wednesday.
The European Court of Human Rights (ECHR) on Tuesday condemned Italy and called for legislative changes after "torture" during a police raid in July 2001 on anti-globalization protestors camping out at the Diaz school during the Genoa G8 summit. The court condemned Italy not only for what happened to the demonstrators, but also because it said the country lacks appropriate legislation to punish the crime of torture even though it ratified a UN convention on torture in 1988. The government said in response that an anti-torture bill mandating sentences of up to 12 years now before the Lower House would be sped up.
"We take responsibility as a country for this delay," Ferranti said.
"We hope to get the bill through the Lower House by the end of this week (so it can) go to the Senate for definitive approval by the summer".
The Diaz raid is perhaps Italy's most notorious case of police brutality. In the night assault on the Diaz school, hundreds of police attacked about 100 activists and a few journalists, wounding 82 and seriously injuring 61 - three critically and one, British journalist Mark Covell, left in a coma with rib and spinal injuries. Officers planted evidence including two Molotov cocktails and hammers and knives from a nearby construction site to justify the raid. Amnesty International called the event "the most serious suspension of democratic rights in a Western country since the Second World War". In its ruling Tuesday, the ECHR upheld a complaint from a 62-year-old Italian, Arnaldo Cestaro, who was brutally beaten that night and still suffers from the injuries he sustained. It noted that none of the officers who actually inflicted the beatings are serving jail time because of the statute of limitations, and urged Italy to rectify this. Also on Wednesday, governing Democratic Party (PD) president Matteo Orfini said it is "shameful" that Gianni De Gennaro is now president of State-controlled defence giant Finmeccanica, because he was national police chief during the scandal-hit Genoa G8 summit.
De Gennaro, appointed head of Finmeccanica in July 2013, ordered the raid on demonstrators but was not punished by the courts. He was the only ranking officer to escape nominal punishment.
"I said it when he was appointed and I repeat it today after the ruling," Ofini said in a post on his Twitter feed.
"I find it shameful that De Gennaro is president of Finmeccanica".