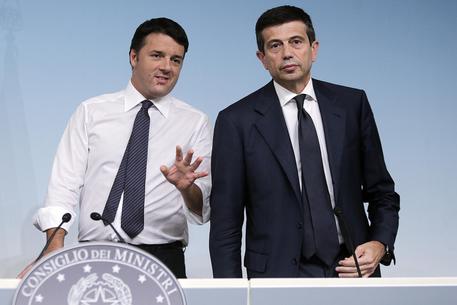 (ANSA) - Rome, March 20 - Transport and Infrastructure Minister Maurizio Lupi stepped down amid a graft scandal Friday saying he could hold his head high because he had done nothing wrong.
Premier Matteo Renzi said he would take over the portfolio for the next few days and on Monday see President Sergio Mattarella as the first formal move in finding a replacement.
Renzi said Lupi's quitting will not have "any political consequence for the government". "We will go ahead with the reform process which Lupi will help too no longer as minister but as MP," he said.
"A new minister will be named in the next few days," he added.
Lupi told the Lower House on Friday that he was resigning from his post with a clear conscience. "I leave the government with my head held high, looking at you in the eye," he said as he reported to parliament after being linked to a corruption probe. Lupi had come under fire over allegations he asked for favours for his son from graft suspect Ercole Incalza, a former top executive at his ministry who remained as a key ministry consultant until he was arrested earlier in the week. Neither Lupi not his son are under investigation.
"I acknowledged the need for the act that I'm carrying out 72 hours after the events," said Lupi, who had announced he was quitting on Thursday. "And I communicated this to the premier and the president - 72 hours after the events, not 72 days".
The minister, a member of the New Centre Right (NCD) party that is a junior partner in Premier Matteo Renzi's ruling coalition, reiterated that he had done nothing wrong.
"I cannot allow three days to cancel out all that I've done in 22 months," he said.
Lupi's infrastructure ministry was at the centre of many of the contracts in question in a corruption investigation and he was set to face a no-confidence motion on Tuesday, presented by the opposition Left, Ecology and Freedom (SEL) party and the anti-establishment 5-Star Movement (M5S). Prosecutors said Incalza, a public-works official for seven governments, oversaw "systemic corruption" on a massive scale. He was arrested Monday along with his aide Sandro Pacella and businessmen Stefano Perotti and Francesco Cavallo in the probe that saw more than 50 people including politicians placed under investigation for suspected kickbacks that inflated costs by as much as 40%. Lupi's son was allegedly hired by an engineer, Giorgio Mor, at Perotti's behest in what a judge said was a favour that might have been reciprocated in some way. The indirect hiring of Luca Lupi by Perotti may have been part of "an illicit quid pro quo" by the minister, a judge alleged. The decision to quit came after Lupi and his party head, Interior Minister Angelino Alfano, met with Renzi on Thursday.
Touted as one of the main candidates to replace Lupi, National Anti-Corruption Czar Raffaele Cantone said: "I have enough on my plate as it is.
"I don't think I'm really in the frame," said Cantone, who has had his hands full with a stream of graft cases involving most political parties as well as top officials and leading businessmen.
A poll Friday said over one in six, or 63%, of Italians approve of Lupi's resignation.
Another 14% of respondents to the Ixé poll for RAI public broadcaster said Lupi should keep his job and 23% had no opinion.
As for the fight against corruption, 65% said the government isn't doing enough while 23% approved of its policies.
Renato Brunetta, House whip for Silvio Berlusconi's Forza Italia (FI) party, said Lupi had been "struck down without scruples" while FI's Lombardy coordinator, Maria Stella Gelmini, said Lupi might still be the centre right's mayoral candidate in Milan in May.