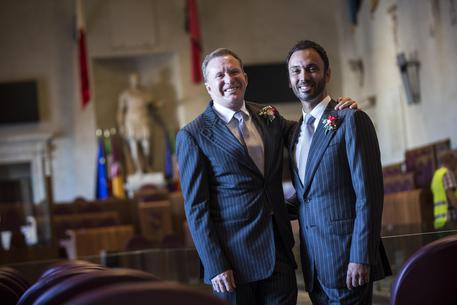 (ANSA) - Rome, May 9 - The Lazio regional administrative court (TAR) ruled in favor of gay plaintiffs Monday that only civil courts, not prefects, can annul the transcription in Italy of gay marriages contracted abroad. The plaintiffs had appealed the annulment of their marriage transcriptions by the Rome prefect on orders of Interior Minister Angelino Alfano. This was the latest move in Italy's contentious gay marriage debate after mayors in Bologna, Florence, Reggio Emilia, Rome, Milan, Trieste and Udine defied Alfano and transcribed gay marriages.
The mayors, including Rome's Ignazio Marino, have created special registries for these unions and have proceeded to officially transcribe them.
Marino said in October that the city's legal department was considering whether to take the issue to the European Court of Human Rights.
Milan Mayor Giuliano Pisapia said on Facebook in February that he will "oppose...a discriminatory decision" to cancel the city's registry of gay marriages contracted abroad.
That ruling came from the city's prefect, Francesco Paolo Tronca.
Last month, Premier Matteo Renzi's ruling Democratic Party (PD) vowed to set up a work group to frame a law governing civil unions in Italy after a meeting with LGBT groups in Rome.
LGBT rights groups announced they are planning a mass wedding celebration in Rome for 100 couples in May.