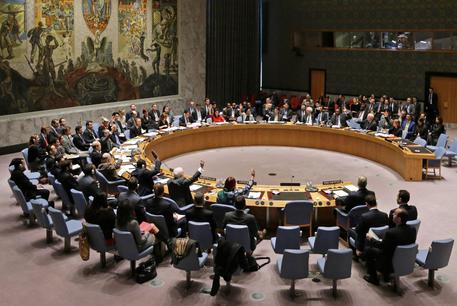 (ANSA) - Rome, February 19 - Italy told an emergency meeting of the United Nations Security Council late Wednesday that it was ready to play a "lead" role in finding a political solution to end the chaos in Libya.
The meeting was called amid international concern about advances made by jihadists linked to ISIS following the beheading of 21 Egyptian Coptic Christians in Libya at the weekend.
In a video of the murders, a jihadist warned ISIS was now "south of Rome" and no longer isolated to the areas it controls on Syria and Iraq.
Italy's permanent representative at the UN, Sebastiano Cardi, told the Security Council that Italy was ready to help watch over an eventual a ceasefire and train local armed forces as part of of a UN-mandated mission. The Italian government has been pressing hard for the international community to take action to end the chaos that has ensued in Libya since Muammar Gaddafi's regime was overthrown in 2011.
Italy's southern-most islands are only several hundred kilometres from Libya.
At Wednesday's meeting, the governments of Libya and Egypt both called for an end to the arms embargo that is in force to help the fight against ISIS. Two rival governments and parliaments - one in Tripoli, the other in Tobruk, each backed by different militias - rule in the eastern and western regions of Libya. A diplomatic solution to the crisis could see those governments ending hostilities and joining forces against ISIS without a military intervention by foreign forces. Egypt has attacked ISIS targets in Libya in response to the beheadings.