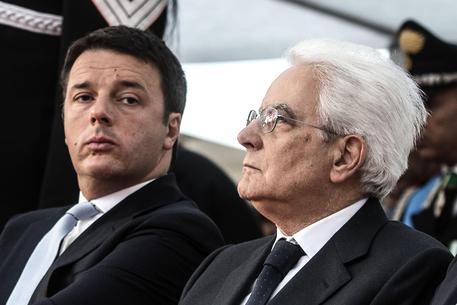 (ANSA) - Rome, January 29 - Premier Matteo Renzi on Thursday tapped top judge Sergio Mattarella as the Democratic Party's (PD) candidate for Italian president, closing rifts within his party but sparking a row with ex-premier and centre-right leader Silvio Berlusconi.
The center-left premier and the media mogul in early 2014 sealed the so-called Nazareno pact in which Berlusconi committed his Forza Italia (FI) party to back Renzi's electoral reform bill - which passed the Senate this week - and other far-reaching reforms. Renzi's move to name Mattarella - a Constitutional Court judge who once resigned as minister rather than vote a broadcasting law that favored Berlusconi's Mediaset empire - raised the media magnate's hackles.
"This situation marks a halt to the Nazareno pact," Berlusconi said.
"It wasn't us who broke the pact, it was Renzi," he added.
However, the choice of Mattarella generated goodwill among PD rebels.
The mood in the fractious PD "will be calmer" now, dissenting MP Stefano Fassina said.
"Mattarella's election will provide stability, allow us to complete the electoral law and Senate reform and launch a battery of interventions for the economy," said Fassina, a vocal critic of Renzi.
Also on Thursday, Renzi told the PD to cast blank votes in the first three rounds of voting to elect a successor to 89-year-old Giorgio Napolitano, who stepped down as president this month. Renzi is aiming to elect a successor to Napolitano in the fourth ballot, when the number of votes needed to elect a new head of State will drop to a simple majority of the 1,009 so-called 'grand electors' - or 505 votes. A majority of two-thirds - or 673 votes - is needed in the first three rounds.
There was no quorum for the first vote Thursday afternoon, meaning that balloting was declared void. Voting for a replacement for Napolitano is scheduled to continue Friday with two ballots daily until a president is elected.