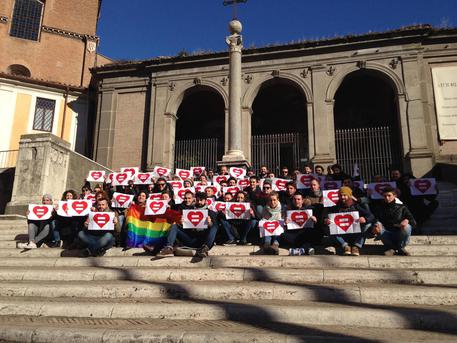 (ANSA) - Rome, January 28 - The latest move in Italy's contentious gay marriage debate came on Wednesday as the Rome city council approved the establishment of a civil union register.
At the same time, the council passed an amendment saying that same-sex marriages contracted abroad are to be automatically transcribed into the newly created civil union register.
"We approved an amendment allowing for gay marriages contracted abroad to be automatically added to Rome's civil unions register," said city council member Irma Battaglia from the leftwing Left Ecology Freedom (SEL) party.
The controversial move was backed by Democratic Party (PD) Mayor Ignazio Marino, his centre-left coalition, the anti-establishment 5-Star Movement (M5S), and SEL.
Centre-right parties New Center Right (NCD), Forza Italia (FI) and Brothers of Italy (FdI) voted against. Marino, who has long favored legalizing gay marriage, was on hand for a vote he called a "historic milestone". "This is not only an act of civility and respect...it (puts us) in line with the main European countries with whom we share our political and cultural history," Marino said. Some well-known LBGT activist-politicians were also witnesses to the event, including Puglia's openly gay governor and SEL chief Nichi Vendola and transgender former MP Vladimir Luxuria. Marino is among a number of Italian mayors who have defied orders from Interior Minister Angelino Alfano not to transcribe same-sex marriages contracted abroad into local registers. In Italy, civil unions between same-sex partners are not yet nationally recognized, much less marriage.
However the recognition of same-sex marriages performed abroad, especially in countries with which Italy is bound by treaties, is subject to debate. "Now we must fight for gay marriage," said Vendola as he hailed the Rome vote.
"We must leave the Middle Ages behind and allow de facto couples and civil unions (to obtain) juridical recognition and legitimacy," said the SEL leader.