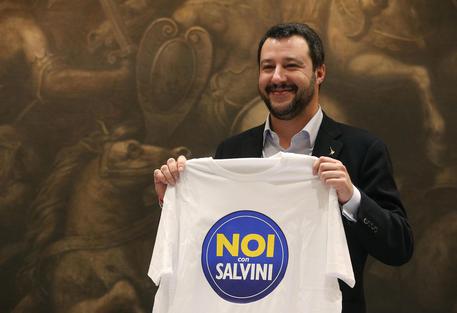 (ANSA) Rome, December 19 - Northern League leader Matteo Salvini unveiled Friday his symbol for a campaign to win support in Italy's south using the slogan 'Us with Salvini." Salvini presented the symbol, a white background with a blue oval and 'Noi con Salvini' written in yellow and white, at the Lower House of Parliament.
"The North will keep the League," Salvini said, "from today we leave for the South but I say no to anyone who thinks they can get on the bandwagon to save their job.
"Honesty and clean criminal record are pre-requisites for avoiding the risks of infiltration".
The League's popularity has swelled since Salvini last year took the helm of the party, with his mix of calls for independence for Northern Italy, hard-line stances in migrant issues and Euroskepticism.
League figures in the past, including Salvini, often used derogatory language to talk about Rome and southern Italy.