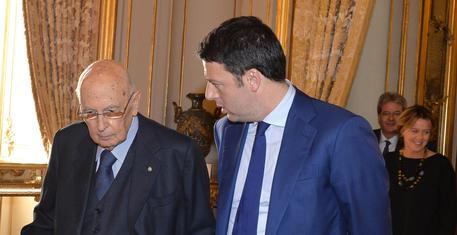 (ANSA) - Rome, December 18 - President Giorgio Napolitano on Thursday confirmed his planned resignation as Premier Matteo Renzi said an election will be "no problem". Napolitano said in a speech what many have expected - his plans to resign at the end of this year.
As he opened his speech to the diplomatic corps, Napolitano said that he was ready to step down.
"The coming end of this year 2014 and the imminent end of my presidential term inevitably lead me to reflect on the complex and troubled period that we are going through in Italy, Europe and the world," said the president.
Rumours of his possible resignation have triggered questions about the next vote for president of Italy.
Renzi said that Italy will have "no problem" with its next election for president. "We have learned the lessons of April 2013," he said heading into a meeting of European Union leaders that he will chair in Brussels.
Napolitano agreed in 2013 to remain in the presidential position a second term because of a crisis in election a replacement.
In Rome, Reform Minister Maria Elena Boschi said her governing Democratic Party (PD) has an understanding with Forza Italia (FI), led by ex-premier Silvio Berlusconi, on the timing of election reform measures and voting for a new president.
The PD timetable is to see reforms approved in January followed later by a presidential election.
Cabinet Secretary Graziano Delrio added that the government will "respect its timetable" on its election reform bill.