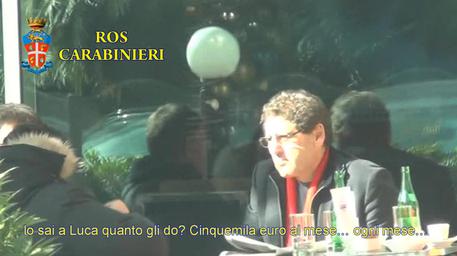 (ANSA) - Rome, December 3 - Immigrants and Roma people were the main racket of an alleged mafia syndicate in the Italian capital, judicial documents showed on Wednesday.
Former center-right Rome mayor Gianni Alemanno is among some 100 people under investigation in a probe into the alleged mob that rigged public contracts that has netted 37 arrests so far.
Among those put behind bars is the Roman mobsters' alleged leader Massimo Carminati, a former member of the NAR neofascist terrorist group and of the Banda della Magliana crime gang.
"Do you have any idea how much I make on these immigrants?" Carminati's right-hand man Salvatore Buzzi says in a 1,200-page wiretap from early 2013. "Drug trafficking is not as profitable".
"We closed this year with turnover of 40 million but...our profits all came from the gypsies (Roma people), on the housing emergency and on the immigrants," Buzzi said.
"We didn't make any money in the other sectors," he added.
These sectors, according to prosecution documents, included waste management and recycling, parks maintenance, and immigrant and refugee reception centers (CIEs).
The immigrant racket - which allegedly involved controlling the social cooperatives running the CIEs and the Roma people camps - was allegedly coordinated by Luca Odevaine, a deputy cabinet secretary under former center-left mayor Walter Veltroni. "This gentleman criss-crossed all key public offices dealing with the immigrant emergency, both vertically and horizontally," prosecutors wrote.
"Odevaine used his contacts...to steer authorities to follow his indications, aimed at furthering the economic interests of certain entrepreneurs, which he shared," the prosecution wrote.
"We must take the measure of (current center-left Mayor Ignazio) Marino," Buzzi continues in the wiretap from early 2013, soon after the Democratic Party (PD) candidate Marino replaced Alemanno. Marino, it appears, proved difficult to approach.
"They trust (center-left Lazio Governor Nicola) Zingaretti, no one trusts Marino," Buzzi says in the wiretap.
Also on Wednesday, the United Nations refugee agency (UNHCR) blasted the corrupt practices.
"Hosting refugees is an inescapable duty, not merchandise for criminal affairs to the detriment of the refugees," said UNHCR Regional Representative for Southern Europe Laurens Jolles.
Italy has been repeatedly criticized by human rights watchdogs like Amnesty International for ongoing discrimination against the Roma and Sinti people's rights to education, housing, health care and employment.