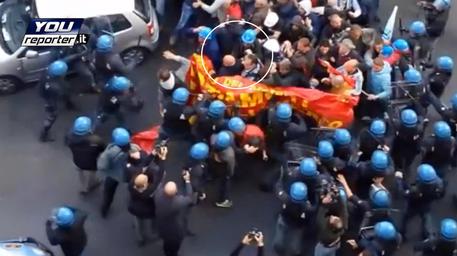 (ANSA) - Rome, November 4 - New rules of engagement for police operating at public demonstrations are under consideration by the interior ministry, Italian media reported Tuesday.
Under the new rules the forces of law and order would have to stay at a required minimum distance from protesters in order to avoid physical contact, which should only occur as a "last resort", Corriere della Sera and Il Messaggero newspapers report.
Batons should only be used in extreme cases.
The new rules are being mooted following ugly scenes at a protest in Rome last Wednesday when workers from AST steel plant in the Umbrian town of Terni demonstrating against redundancies clashed with police, who used batons on them allegedly in an effort to prevent them from occupying Termini rail station.
Eight people were hospitalized as a result, including five workers with head injuries and three cops with contusions.
In a briefing to parliament, Interior Minister Angelino Alfano said police acted on "a rumor they heard on the street", but denied reports that orders to be tough on protesters had come from above.
There were also clashes between police and protestors on Monday in Brescia, where Premier Matteo Renzi was addressing industrialists.
The new rules - whose aim is "to ensure the safety of citizens but also of the officers called to guarantee security" - will be put to the relevant labour unions for evaluation on Thursday.