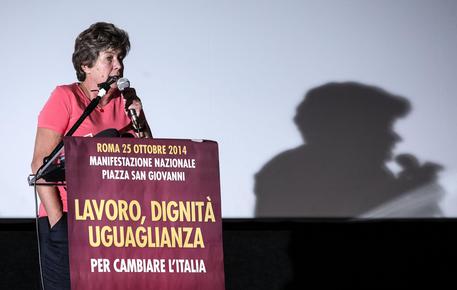 (ANSA) - Rome, October 13 - CGIL leader Susanna Camusso said Monday that Italy's biggest trade union confederation will call a general strike to protest against the government's Jobs Act labour reform after a big demonstration on October 25. "We have to continue mobilizing (after the rally)," Camusso said. "A general strike is one of the things we'll use, but no one should think that's all". The leftwing CGIL has so far not been able to agree on a unified plan of action in response to the reforms with the two other big union confederations, the more moderate UIL and CISL.
"We did not wait for CISL and UIL (to call the October 25 rally) but our strength will truly be when they also take to the streets," Camusso said.
CGIL is staunchly opposed to the Jobs Act over changes for newly hired staff to Article 18 of the 1970 Workers' Statute, which protects from unfair dismissal. Camusso went on to berate the government of Premier Matteo Renzi for "taking its platform from Confindustria," which represents Italy's largest industrial employers.
She added that Renzi "has no idea where to take the country".
Italy, said Camusso, is the only European Union country without a patrimony tax on its wealthiest citizens, and it also has the lowest inheritance tax. The government's budget bill to be unveiled this week "is merely the repetition of those that preceded it", Camusso said.
The CGIL will rally against the government and not only in defense of Article 18, she explained. "Yes there is a need to change the (1970 Workers) Statute, but only in order to expand the rights and protections now reserved to those with permanent full-time contracts to all other forms of labor," she said.
The Jobs Act, which passed its first reading in the Senate last week thanks to a confidence vote, progressively raises safeguards for new hires, slashes the plethora of temp contracts currently plaguing entry-level workers, establishes a minimum wage, and extends unemployment benefits.
But is also scales back Article 18 job protections for new hires in a move that Renzi hopes will encourage business to resume hiring and begin to expand to lift Italy out of its third recession in since 2008.
The premier won the confidence vote despite opposition by a minority within his Democratic Party (PD) to changes to Article 18 as it applies to new hires.
Renzi argues Article 18 discourages firms from hiring staff because the law makes it harder to fire workers, and therefore has contributed to high levels of unemployment and the overuse of temporary and freelance contracts, especially for young people.