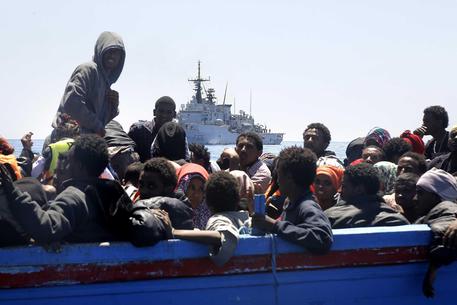 (ANSA) - Rome, May 7 - Defence Minister Roberta Pinotti defended the humanitarian Navy-led operation Mare Nostrum (Our Sea) patrolling Italy's southernmost borders on Wednesday, saying 27,790 illegal immigrants have been rescued and more than 200 human traffickers arrested.
Among the thousands the Mare Nostrum task force has rescued while trying to reach Italy by sea from Africa were 3,034 minors, the minister told the Chamber of Deputies in response to criticism from the Northern League party, which said the funds would be better spent on encouraging businesses.
The Mare Nostrum operation was set up in October 2013 spearheaded by 782 Italian Navy personnel aboard a flotilla of vessels supported by Carabinieri, Coast Guard, police and Air Force units. An increasing proportion of the illegal immigrants to Italy are political refugees, Pinotti added. "Two thirds of them qualify to ask for political asylum," she said. In all 93% of illegal immigrants pass through Libya on their way to Italy.
Mare Nostrum is a short-term operation and the EU should do more to help Italy, Pinotto said, adding that Rome will underline that position when Italy takes over the rotating chairmanship of the EU.
"After the European elections the interlocutors will change since the (European) Parliament and the Commission will be renewed," Pinotti said.