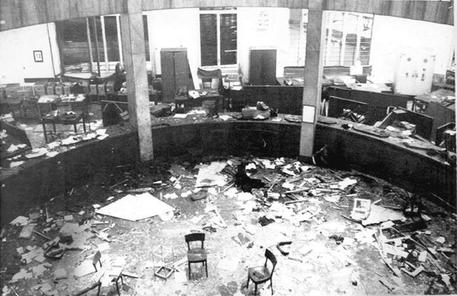 (ANSA) - Rome, April 22 - Italian Premier Matteo Renzi on Tuesday signed an order to declassify secret case files including the 1980 airplane crash near the Sicilian island of Ustica, the 1969 Piazza Fontana bombing in Milan that killed 17 people and sparked the 'Years of Lead', and the 1980 Bologna train station bombing that killed 85 and wounded more than 200. Both bombings have spawned streams of conspiracy theories focusing on the alleged involvement of Italian and probably foreign secret services in suspected cover-ups of acts of terror from militant left- and right-wing groups during the postwar. In the case of the Ustica plane crash, Italy's supreme Court of Cassation found last October that a missile fired from an unknown source was the definite cause of all 77 passengers' deaths, and said that "cover-ups" in investigations into Itavia Flight 870 must now be considered "definitively ascertained".
Renzi's declassification order also applies to the 1974 Italicus train bombing which killed 12 in the Apennines between Florence and Bologna; the 1974 bombing in Brescia's Piazza della Loggia that killed eight and wounded 100; the 1970 train bombing that killed six in the southern Gioia Tauro train station; the 1972 car bombing that killed three police officers in Pateano, northern Italy; and the 1984 Rapido 904 massacre in which 16 died when a bomb exploded on the Florence-Bologna train line.
It is the second time Renzi, the 39-year-old former mayor of Florence who has vowed to shake up established politics, has declassified unsolved cases since becoming premier in February. Last month the government authorized the declassification of secret case files into the 1994 slaying in Somalia of Italian TV journalist Ilaria Alpi and her Slovenian cameraman Miran Hrovatin.
Investigators have long suspected the pair was killed to prevent them revealing a high-level conspiracy to divert Italian aid to an organisation trafficking in weapons and toxic waste.