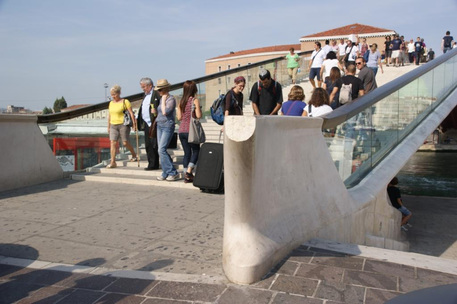 (ANSA) - Venice, august 14 - An Audit Court in Venice has ruled that Catalan architect Santiago Calatrava must pay a fine of 78,000 euros for revenue losses caused by the project of his controversial Constitution Bridge on the Lagoon City's Grand Canal.
A court of first instance had acquitted the architect.
The project cost 11.6 million euros instead of the seven million originally planned, a "macroscopic negligence" for which the architect was held responsible.
The judges said that Calatrava, among other things, underestimated the dimension of pipes for the bridge and planned stairs, partly in glass, that were originally supposed to last at least 20 years and immediately started to get ruined.