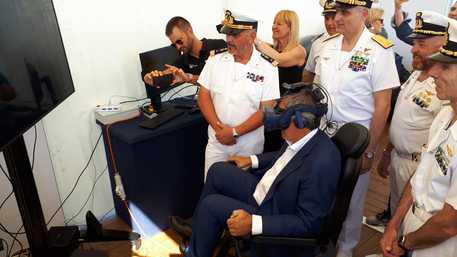 (ANSA) - Venice, June 18 - "Our generation has a moral duty, that of defending the sea environment with research and industry," Venice Mayor Luigi Brugnaro said of the Venice Boat Show which opens tomorrow and closes Sunday in the waters of the Arsenal.
"We do so as dad and mum for their children, we believe in sustainability for future generations".
Today was the press preview in which the first citizen acted as guide for journalists and news operators, visiting the 120 exhibitors, from institutional ones to major shipbuilding firms.
"Venice," he underscored, "wants to think and rethink culture and sea mobility, and if Venice wins the whole Adriatic wins".
Among the most significant presences in Venice is the Ferretti Group, which after feting the 'Riva 50 Race' presents in a world premiere the new CRN 106 and the Riva 90 Argo. Among the other shipbuilders are Monte Carlo Yachts, Cantiere Navale Vittoria di Adria (Rovigo), and Cranchi. But proposals of small, hybrid and electric boats are not lacking, as well as the traditional vessels of the lagoon, the historic civilian and military boats, maritime services and plant.
The international fair event, whose motto is "The naval art comes home", includes a water surface of 50,000 square metres, half inside the naval base of the Italian Navy, which hosts the HQ of the Istituto di Studi Militari Marittimi and the main Command of the armed force in the lagoon city.
"We're starting with small boats," said Brugnaro, "to rise up to the most deluxe ones. "We are in synch with the Biennale of Art, the biggest art exhibition in the world, and we are proposing ourselves as 'naval art', walking in the tradition of those who love the sea, respect it and put it at the disposal of all the country for its relaunch". Also behind the idea of the show is the wager for the relaunch of the Adriatic as a market for shipbuilding and leisure sailing. The Adriatic therefore deserves a showcase not in competition with other shows around the peninsula, but a fresh opportunity for new markets, principally that of eastern Europe. "We have the name of Venice," said Brugnaro, "a city made with courage, open to the whole world. We have an international airport, one of the busiest in Italy. We have our arms open to all the populations of the Adriatic and all the people of the sea," he concluded.