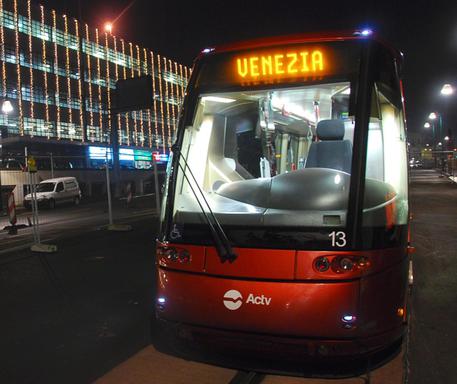 (by Rosanna Codino) (ANSA) - Venice, September 15 - An "old-fashioned" method of transport is helping Venice take a leap into modernity on Tuesday with the inauguration of a tram line connecting Venice's mainland twin Mestre with Piazzale Roma at the city's entrance.
It's been 10 years since the project broke ground, and five years since the Mestre public transport line went operational. Now that the tram project is complete, it is a revolution for the city's transport system, destined to change the way residents and tourists alike reach the lagoon city.
Despite some delays during construction, the red trams - the same model that has been in use in Padua since 2007 - reach Piazzale Roma just minutes after crossing the Ponte della Libertà road bridge connecting Venice to the mainland in Mestre.
For a city with a geographic profile all its own, the new tram makes for a completely new way to arrive, since the choice to use public transport (up until now a public bus) to reach the centre of Venice isn't one of economy or environmental awareness so much as it is one of simple necessity given expensive and limited parking in the city.
Up until now, whoever couldn't afford the cost of a taxi from Mestre was forced to board a public bus, oftentimes having to take luggage along for the ride.
"The tram is something absolutely new, and as such it will require a change in passenger habits," said Giovanni Seno, CEO of Venice mobility company AVM.
That's because some of the established bus lines of ACTV, the city's public transport company (whose parent company is AVM), will be retired, while others will now terminate at Mestre rather than Piazzale Roma, requiring riders to transfer at Mestre's Piazzale Cialdini depot to the new trams or a different bus in order to reach the city centre.
Trams and line 4L buses are scheduled to leave for Venice from Mestre every five minutes.
To manage the arrivals, expected to be chaotic, the company has hired special employees to help passengers at the depots and onboard the trams, so that they can find the correct line.
In addition, more than 1,300 posters and 15,000 brochures about the changes and new tram lines have been printed.
"(It's) a cultural revolution that will introduce a new system of access to the historic centre and will change the flow of traffic along the trans-lagoon bridge, lightening a good portion of wheel-based traffic," Seno said.
"Also for the first time, a 'transit point' system will be introduced, in the same way as in other large international cities, that will allow for transfer points and commuter car parks so passengers can transfer to the tram or the bus".