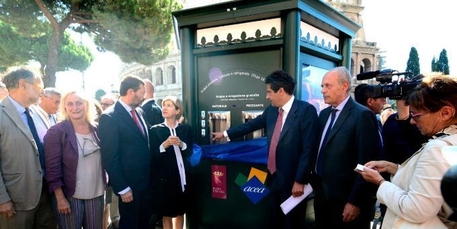 (ANSA) - Rome, September 10 - Rome is installing 100 high-tech 'water home' (case dell'acqua) distributors around the city for the Jubilee year which begins in December, utility Acea said on Thursday.
One of the first distributors in the city centre started operating on Thursday next to the underground station by the Colosseum, offering tourists, pilgrims and locals a glass of either still or sparkling water.
"It is the same water that arrives in Roman households but it is refrigerated and added to," said Acea Chief Executive Alberto Irace.
Other water distributors are due to be installed near Castel Sant'Angelo, by the underground stops Cipro and Ottaviano near the Vatican, and by Saint Peter's railway station.
The distributors are funded by Acea and will cost a total of three million euros.
Pope Francis declared an extraordinary Holy Year, or Jubilee, on the theme of divine mercy to begin on December 8 and continue until November 20, 2016. Millions of pilgrims are expected in Rome, and authorities have launched a packet of measures to prepare the city for the event.