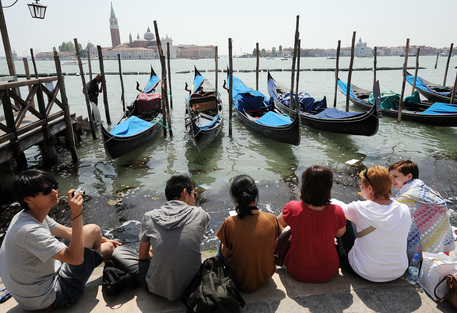 (ANSA) - Venice, August 19 - Many foreign tourists visiting St Mark's Square said Tuesday they would be willing to pay an entrance fee to the lagoon city but dislike the idea of a limit being placed on the number of visitors.
"This is a good idea," said a French tourist admiring St.
Mark's Basilica, "if the money collected would be used to clean the city".
The longstanding proposal for an entrance ticket to Venice to discourage day trippers was mooted again recently by the Undersecretary for Cultural Heritage and Tourism, Ilaria Borletti Buitoni, saying "one can't adapt Venice to tourism, but tourism must adapt to the city respecting its dimensions and integrity".
Her comments set off a furore, with the tour operator' association Assoturismo-Confesercenti strongly against the idea, supported also by Regional Veneto Governor Luca Zaia, while the Venezia Federalberghi hoteliers' association strongly supported the idea of charging, arguing that day trippers congest the city and put a strain on public services.
As many as 90% of tourists polled in and around St. Mark's Square were in favour of an entrance ticket. "I am totally in agreement with the introduction of the ticket," a lady from Milan said, "you only have to look around, if the city had more funds available, it could offer more services".
Tourists, however, were opposed to the idea proposed by the Governor and by other local officials since the 1980s to set a limit on tourists who will have to reserve entrance to Venice, a proposal designed to stop hordes of backpackers turning up and sleeping on the Lido beach.
A Roman couple opined that "prices are already high and we already pay our taxes, that is enough ... and no also to a limit on visitors".
Yet many of those working in Venice support both proposals.
For example Gianfranco, one of the "San Marco Guardians," said "trying to regulate the flows of tourists is fundamental, because as things stand nobody can enjoy the city any more.
Obilgatory reservation would be welcome just as people have to reserve to see an exhibit. I agree to charging an entrance ticket on condition the city provide more services, which at the moment are lacking, starting with more decent public lavatories and some more benches". An entry ticket would provide a welcome boost to city coffers given that there are 20 million tourists a year in Venice.
A gondolier was sceptical about the entire debate, however.
"Ticket? Limited numbers? No comment, it makes no difference what we think because in the end the authorities just do what they want," he said.