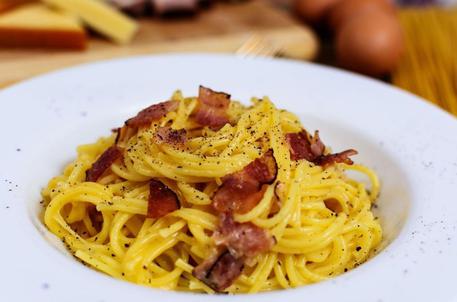 (ANSA) - ROME, APR 6 - Exports of Italian past have risen 16% despite the COVID emergency, farm group Coldiretti said on International Carbonara Day Tuesday.
Pasta sales in Italy are also 10% up, it said.
The export boom is however fed by "fake" versions of Carbonara, such as the culinary crime of adding cream that originated in Belgium, or the smoky bacon version recently publicised in the New York Times, Coldiretti said.
As well as committing the offence of using bacon instead of guanciale (cured pig's cheek or pork tongue), as per the original recipe, the US version also employs Parmesan, the bogus clone of Parmigiano Reggiano, instead of the recommended Pecorino Romano, Coldiretti said.
This proliferation of sub-par imitations of classic Italian food products is helped by the lack of clear, government protected recipes, the farmers' association said.
Italian traditionalists insist there are only five carbonara ingredients: pork tongue, pecorino, eggs, salt and pepper.
Innovators think that, since pasta is such a versatile dish, there should be no limits on how carbonara can be interpreted, going as far as "culinary science fiction", according to detractors.
In France and Germany, for example, powdered ingredients are on sale for preparing a carbonara; in Britain the egg is often replaced by bechamel sauce; and in Japan chefs regularly add cream and take out the pecorino - an affront to tradition according to purists. (ANSA).