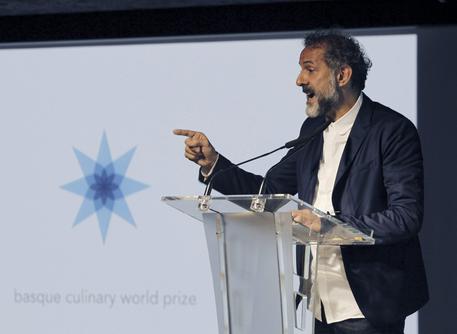 (ANSA)- New York, July 19 - Italian chef Massimo Bottura, whose Modena restaurant was recently ranked the world's best, has launched a joint venture with American movie star Robert De Niro to bring his fight against food waste to the United States.
Bottura launched the Ambrosiano Refectory project at the Milan Expo World Fair in 2015. It gathered leftover food from various restaurants and food stands at the fair and turned it into meals for the poor and homeless at a soup kitchen run by Catholic charity Caritas.
During the Expo Milan soup kitchen, 60 of the best chefs in the world worked hard to turn 15 tonnes of leftover food into meals for the homeless.
On Tuesday, the celebrity chef announced the new project on Twitter: "Planning the new refectory in the Bronx. With Bob in 2017," he wrote.
For the Rio Olympics, food waste from the Olympic Village will be used to feed inhabitants of Brazilian slums.
The largest favela in Rio, Rocinha, will benefit from the project, which will include cooking and nutrition classes for those in need. Overall, 45 chefs from around the world and volunteers will contribute to the initiative, which will provide thousands of meals for the poor.
Oscar winner De Niro, who also owns the Tribeca Grill, Nobu and Locanda Verde restaurants in New York, paid Bottura a visit in Modena last weekend to discuss the plans to replicate the project in the U.S.
Bottura, who has carried out a similar event in Bologna, has also launched the cultural foundation Food For Soul, which was approved by Pope Francis to raise global awareness of the fight against hunger and food waste.
In June, Bottura's Osteria Francescana in Modena was ranked the world's top restaurant in the World's 50 Best Restaurant Awards List compiled by the British magazine "Restaurant" and based on the votes of hundreds of chefs, critics and food lovers.