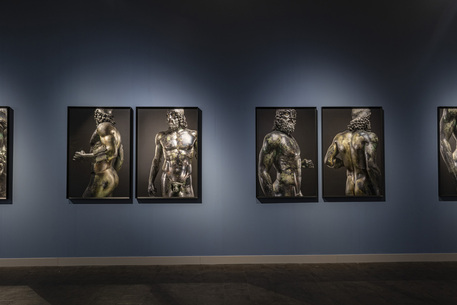 (ANSA) - ROME, DEC 28 - Italian exhibitions that have just opened and are set to thrill visitors over the New Year holidays include a new look at the iconic Riace Bronzes in Florence, an eye-opening show on Byzantine art and culture in Naples, and a vast survey of Ancient Egypt in Vicenza.
The exhibit The Riace Bronzes, A Path Via Images, Luigi Spina's Photographs runs until March 12 at Florence's Galleria dell'Accademia, the home of Michelangelo's David.
It is a tribute to the ancient Greek warrior statues 50 years after their discovery in the Calabrian sea, featuring 16 large photos, eight each of the staggeringly beautiful and life-like works.
The show The Creators of Ancient Egypt, Scribes, Artisans and Workesr in the Service of the Pharaoh, runs at Vicenza's Basilica Palladiana until May 7.
It comprises 160 works from Turin's famed Egyptian Museum and 20 from the Louvre, featuring masterpieces of statuary, decorated sarcophagi, papyrus rolls, bas-reliefs, painted stele, amphorae and amulets.
The exhibition Byzantines, Places, Symbols and Communities of a Thousand-Year Empire runs at Naples' MAN archaeological museum until February 13.
It puts on show over 400 works in 15 sections portraying the various historical phases after the end of the Western Roman Empire, with a focus on Naples, a Byzantine city for around six centuries, after its conquest by the general Belisarius in 536 AD, and particular attention also for Greece and southern Italy.
(ANSA).