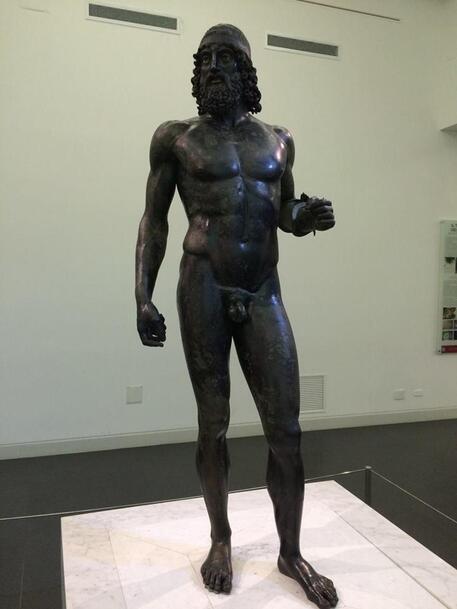 (di Marzia Apice) - ROME, 07 LUG - A long marathon of events embracing visual art, and cinema, among others, along with exhibits and debates and a dedicated website will celebrate until 2023 the historic heritage of the southern region of Calabria on the 50th anniversary of the discovery of the two world-famous ancient Greek warrior statues called the Riace Bronzes on August 16, 1972. The celebration, with all the power of art history, heroes, warriors and legends is called Bronzi50 1972-2022.
The two statues, which recently became candidates to become part of UNESCO's heritage, with their perfection - whose origins and finding are still in part shrouded in mystery - have become a symbol of Magna Grecia (Greater Greece), Calabria and the Mediterranean. Events will have the objective first of promoting Calabria, from July to September and from October to December and over 2023 to make the region "travel" across Italy and the world.
"The Riace Bronzes are an investment and a challenge for our country", Culture Minister Dario Franceschini said in Rome, during the presentation of celebrations. "They are a unique attraction, they must become a symbol of Italy".
The events scheduled include Cubo Stage - an art installation of a cube with videos, as well as a virtual exhibit on Magna Grecia with audiovisual and augmented reality and the docufilm "I Bronzi di Riace", produced by Palomar and directed by Fabio Mollo. On the anniversary of the finding, on August 16, the two warriors with their helms, shields and spears, typical weapons of the mid-fifth century BC, will be at the center of great celebrations: in Reggio Calabria, with an installation of video mapping on the façade of the archaeological museum (where the statues are kept) and on Corso Garibaldi, which will become a set of excellence during the summer. The entire schedule of initiatives dedicated to the Riace Bronzes and Magna Grecia is available on the website bronzi50.it (hashtag ufficiale #bronzi50).