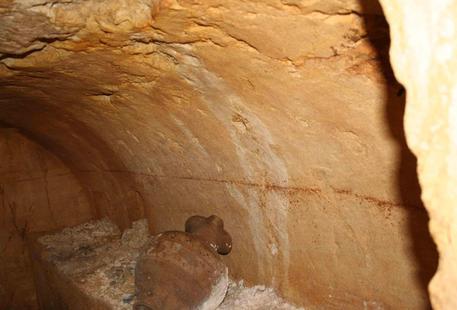 (ANSA) - ROME, JUL 6 - The remains of a 12-year-old boy wearing a warrior's bronze belt have been found at Pontecagnano, an outpost of the pre-Roman central Italian Etruscan civilisation in southern Campania, lead archeologist Gina Tomay told ANSA Tuesday.
"It's a find of great significance," said Tomay of the boy, who lived in the IV century BC and was discovered with two cermaic cups at his feet, one for food in the afterlife and the other for the wine that would ensure him a place at the banqueting ceremony called symposium.
Tomay said the boy was the 10,000th find at Pontecagnano, over 60 years of success and good practices "due to study, research and systematic excavations".
The Etruscan colony there reached its peak between the VIII and VII century BC, she said, in an area "particularly well favoured by nature and also close to the sea".
Objects from all parts of the Mediterranean have been found at Pontecagnano, from Greece to Egypt, from the Far East to Sicily and Sardinia.
A few kilometres of farmland and the RIver Sele separate the settlement from the storied Greek city of Paestum to the west, while not too far to the south lies Pompeii, whose origins, according to recent studies led by archeologist Massimo Osanna, also lie with the Etruscans in the VII century BC.
Osanna, the former Pompeii chief who is today the director general of Italy's public museums, said the Etruscan boy and 10,000th find at Pontecagnano "is also an interesting and precious case study".
The finds may draw more visitors to the site, which is heralded in archeological literature but neglected by major tourism routes, unlike nearby Paestum. (ANSA).