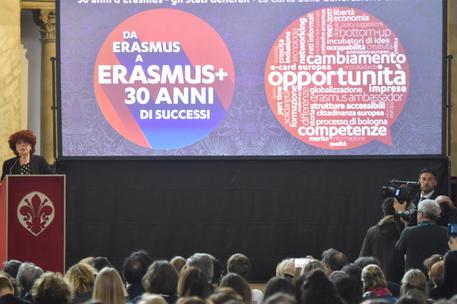 (ANSA) - BRUXELLES, 15 GIU - The film L'Auberge Espagnole (The Spanish Apartment), which sealed Barcelona's status as an Erasmus icon, was not far off from reality.
Spain is not only one of the most popular destinations for Erasmus students, it is also the country with the highest number of university students who decide to go abroad, in absolute terms at least, according to the preliminary results of the IRiE research project, conducted under the aegis of the ESPON programme specialising in the analysis of regional policies.
Spain is top along with the other three big EU States, France, Germany and Italy and, in part, Great Britain, which, even before Brexit, was an anomaly with regards to Erasmus, with few British students taking part in the programme but lots of Europeans going to the UK to study.
Part of the IRiE study looked at the incoming and outgoing flows of Erasmus students in the academic years of 2009-2010 and 2013-2014.
In this period of time, the most visible changes in the flows took place in countries that were in the middle or at the bottom of the table.
In just four years the number of students that went from Croatia, Turkey, Malta and Cyprus to have an Erasmus stay abroad increased by over 50%.
The researchers explained that this is a sign of the "growing integration of these more peripheral areas within the Erasmus network". Peripheral areas are also increasingly in vogue among the students, with the popularity of the Balkan countries, central and Eastern Europe, and Cyprus and Turkey rising. Here the number of students received has risen by over 50%, with students coming from Spain, France, Germany and Italy in particular.
If the same numbers are analysed in relation to the population, the picture changes radically.
Luxembourg, the Baltic countries, Finland and Iceland leap to the top of the table of the States of origin of Erasmus students.
At the opposite end of the table is the United Kingdom, along with Turkey, Croatia, Romania and Bulgaria, despite the significant increases registered by these latter countries in the period analysed.
In the same way, we find the Nordic countries among the most popular destinations, while Malta and Portugal stand out in southern Europe.
Turkey and the countries of central and Eastern Europe drop down, in part because they are new to the Erasmus programme, and in part because their languages are less well known abroad, with Greece and Bulgaria even using different alphabets.
By cross-analysing the incoming and outgoing flows, the researchers observed that some countries 'specialise' in welcoming foreign students: in other words the number of students who come to study from abroad is much higher that the number who pack their bags. This is the case with the Nordic countries, which are among the most popular for the quality of their higher education, and with the two English-speaking countries, the United Kingdom and Ireland.
In other states, such as Greece, Slovakia, Bulgaria, Turkey and Romania, it is the opposite.
This trend is also seen in Italy, France and Germany, which could indicate a greater propensity to study abroad or be a sign of a gradual 'brain drain'. (ANSA).