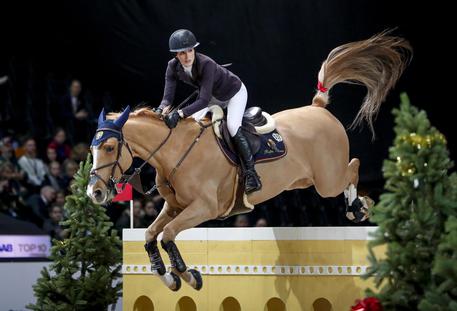 (ANSA) - ROME, JUN 1 - Bruce Springsteen's daughter Jessica came third in Rome's premier showjumping event at Piazza di Siena at the weekend and firmed up her chances of taking part in the Tokyo Olympics.
The prestigious event was won by Germany's David Will with another American, Laura Kraut, coming second.
The winner was presented with the Capitoline Wolf trophy by Mayor Virginia Raggi.
Jessica Springsteen, 29, daughter of The Boss and his wife Patti Scialfa, has represented the United States Equestrian Team in international competition.
In 2016, she won her first five-star Grand Prix jumping competition with her horse Cynar VA, but did not make the short list for the U.S. Equestrian team for the 2016 Summer Olympics.
In May 2017, she won the Falcon Stakes CSI 5* at the Royal Windsor Horse Show riding Davendy S.. (ANSA).