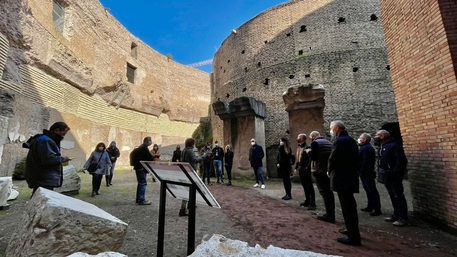 (ANSA) - ROME, MAR 1 - The largest circular tomb of the ancient world, Rome's Mausoleum of August, an emblem of the architectural magnificence of ancient Rome, reopened to the public on Monday after a 14-year restoration.
"We have given back this jewel of mankind's cultural heritage after so many years of closure," said Mayor Virginia Raggi.
The mausoleum of Rome's first emperor will be free to visit until April 21, although visits are already all booked up.
New reservations for the April 22-June 30 period are up for grabs from Monday.
The mausoleum had been closed since 2007 for a major restoration project into which telecoms giant TIM poured some eight million euros.
The Mausoleum of Augustus (Italian: Mausoleo di Augusto) is a large tomb built by the Roman Emperor Augustus in 28 BC on the Campus Martius in Rome.
The mausoleum is located on the Piazza Augusto Imperatore, near the corner with Via di Ripetta as it runs along the Tiber.
The grounds cover an area equivalent to a few city blocks nestled between the church of San Carlo al Corso and the Museum of the Ara Pacis.
The mausoleum was one of the first projects initiated by Augustus in the city of Rome following his victory at the Battle of Actium in 31 BC. The mausoleum was circular in plan, consisting of several concentric rings of earth and brick, faced with travertine on the exterior, and planted with cypresses on the top tier. The whole structure was capped (possibly, as reconstructions are unsure at best) by a conical roof and a huge bronze statue of Augustus.
Vaults held up the roof and opened up the burial spaces below.
Twin pink granite obelisks flanked the arched entryway; these have been removed; one now stands at the Piazza dell'Esquilino (on the north-west side of the Basilica of Santa Maria Maggiore) and the other at the Quirinal fountain. The completed mausoleum measured 90 m (295 ft) in diameter by 42 m (137 ft) in height.
A corridor ran from the entryway into the heart of the mausoleum, where there was a chamber with three niches to hold the golden urns enshrining the ashes of the Imperial Family. Two pillars flanking the entrance were mounted with bronze plaques inscribed with the Res Gestae Divi Augusti, the document describing Augustus' accomplishments and victories. Surrounding the mausoleum was landscaped parkland akin to modern public parks, affording a place of retreat at the heart of Rome's heavily urbanized Campus Martius.
The traditional story is that in 410, during the sack of Rome by Alaric, the pillaging Visigoths rifled the vaults, stole the urns and scattered the ashes, without damaging the structure of the building.Platner and Ashby, however, posited that "The story of its plundering by Alaric in 410 has no historical foundation, and we know nothing of its destruction".
By the end of the 10th century, the mausoleum had become largely buried under earth and overgrown with trees, to the point where it was referred to as the Mons Augustus. A legend of the time referred to a supposed decree by Augustus who ordered that a basketful of earth from every province of the empire was to be thrown upon his tomb, so that he could rest on the soil of the whole world over which he ruled. Atop the Mausoleum stood a chapel built to the Archangel Michael, while alongside was the Church of Santa Maria (or perhaps Martina) in Augusto (later transformed into San Giacomo degli Incurabili).
By the 12th century, the tumulus was fortified as a castle - as was the mausoleum of Hadrian, which was turned into the Castel Sant'Angelo - and occupied by the Colonna family. After the disastrous defeat of the Commune of Rome at the hands of the Count of Tusculum in 1167, the Colonna were disgraced and banished, and their fortification in the Campo was dismantled.
Throughout the Renaissance it passed through the ownership of several major Roman families, who used it as a garden; at the beginning of the 19th century it was in use as a circus.
In the early 20th century, the interior of the Mausoleum was used as a concert hall called the Augusteo, until Mussolini ordered it closed in the 1930s and restored it to the status of an archaeological site. The restoration of the Mausoleum of Augustus to a place of prominence featured in Benito Mussolini's ambitious reordering of the city of Rome which strove to connect the aspirations of Italian Fascism with the former glories of the Roman Empire. Mussolini viewed himself especially connected to the achievements of Augustus, seeing himself as a 'reborn Augustus' ready to usher in a new age of Italian dominance.
(ANSA).