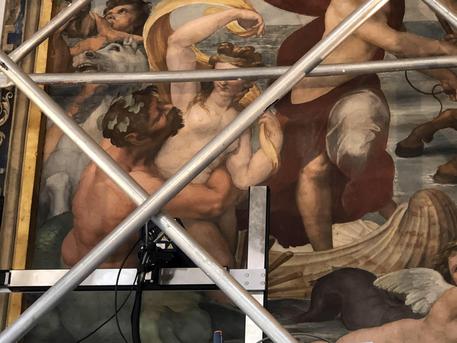 (ANSA) - ROME, SEP 1 - ANSA EXCLUSIVE/ Renaissance genius Raphael recreated the ancient 'Egyptian blue' to achieve the intense blue of the sky and sea in his famed Triumph of Galatea in Rome's Villa Farnesina, according to a new study seen by ANSA.
The hue, the oldest blue in history, had been lost after the fall of the Roman Empire and had been replaced by lapis lazulli.
Raphael carried out a unique experiment in his workshop and used the colour in the masterpiece painted onto the walls of the then luxury Palazzo Chigi, says the study.
The study on the fresco's materials was led by Lincei Academy member Professor Antonio Sgamellotti,.
It was conducted together with ENEA, IRET-CNR, the Spoleto Cultural Heritage Diagnostic Lab, and XGLab-Bruker.
It is the first time, Sgamellotti underscores, "that we find this pigment in a work by Raphael, whose use for the Galatea, not coincidentally a mythological subject, may have been born in the Urbino artist's workshop and engendered by his great interest in the ancient world".
The study, carried out to mark the 500th anniversary of the painter's death, will be presented at the show "Raphael in the Villa Farnesina, Galatea and Psyche", curated by Sgamellotti and by Virginia Lapenta, which will be held from October 6 to January 6, 2021 in the residence designed by Baldassarre Peruzzi and decorated by Raphael together with all the other great names in painting of his time.
The Triumph of Galatea is a fresco completed by Raphael in around 1514.
The Farnesina was built for the Sienese banker Agostino Chigi, one of the richest men of that age, and originally called the Villa Chigi.
The Farnese family later acquired and renamed the villa, smaller than the more ostentatious palazzo at the other side of the Tiber.
The fresco is a mythological scene of a series embellishing the open gallery of the building, a series never completed which was inspired to the "Stanze per la giostra" of the poet Angelo Poliziano.
In Greek mythology, the beautiful Nereid Galatea had fallen in love with the peasant shepherd Acis. Her consort, one-eyed giant Polyphemus, after chancing upon the two lovers together, lobbed an enormous pillar and killed Acis - Sebastiano del Piombo produced a fresco of Polyphemus next to Raphael's work. (ANSA).