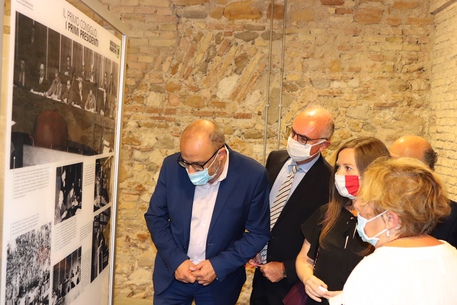 (ANSA) - ANCONA, JUL 13 - The Marche Region is celebrating its 50th anniversary with an array of initiatives, including a photo exhibition at Ancona's Mole Vanvitelliana complex.
The show, produced in collaboration with ANSA and the Fondazione Marche Cultura foundation, opened on July 10 and runs every day, from 15:00 to 21:00, until July 31.
The aim is to tell the story of the area's development via its regional government with over 100 photos.
So the show describes the changes going from an agricultural economy to one with industrial districts, the earthquakes that devastated the region, the community and administrative activities for the development of tourism that led to Marche being named the second-top region in Lonely Planet magazine's Best in Travel 2020 ranking and the period of the COVID-19 emergency.
The ribbon was cut by Antonio Mastrovincenzo, the president of the regional assembly, ANSA Deputy Director General Andrea Fossati, ANSA Marche Desk Chief Alessandra Massi and Fondazione Marche Cultura Deputy Director Riccardo Fonti Bandini.
Civilian and military officials were present too, along with regional councillors Elena Leonardi and Gianni Maggi and ARPAM Director Giancarlo Marchetti.
Most of the photographs, both in black-and-white and colour, come from the archives of ANSA, which has millions of images from Italy and all over the world.
The shots immortalize the most important moments in Marche's history, including some particularly painful ones, such as the 2016 earthquake and the coronavirus emergency.
Others portray the region's great economic resources - research, employment and infrastructure - its riches in terms of natural beauty and artistic and cultural excellence, and the intense activities of the regional government and council to raise the awareness of young people about the institutions and bring them closer.
The exhibition is structured around 21 'totems' and some particularly significant subjects, such as the Marche Region's 'foreign policy' since the end of the 19080s: the first mission to China, the launch of the Mid-Adriatic Community of Regions in 1990 to create a common working area, the tensions in the former Yugoslavia and war in the Balkans, with Marche, and Ancona in particular, on the front line as the base for the humanitarian airlift operation of the Office of the UN High Commissioner for Refugees and aid for injured while Sarajevo was under siege, up until the creation of the Adriatic Ionian Euroregion.
It is possible to 'see again' the first sessions of the region's legislative assembly and its governors, visits by popes and Italian presidents and the first few months of 2020 with the COVID-19 emergency.
"The role of the region evolved over the years, up until it became a concrete part of citizens' lives," said Mastrovincenzo.
"Just think of the management of earthquakes and natural, humanitarian and health emergencies.
"Retracing the path taken over the last 50 years is a source of pride, but also a stimulus to take on the challenges of the future".
Fossati recalled the close relationship between ANSA, which is celebrating its 75th anniversary, and Marche.
ANSA has had one of its 22 regional offices in Marche since 1985.
"With these images, ANSA is helping the region tell the story of what happened in its first 50 years of history," he said.
(ANSA).