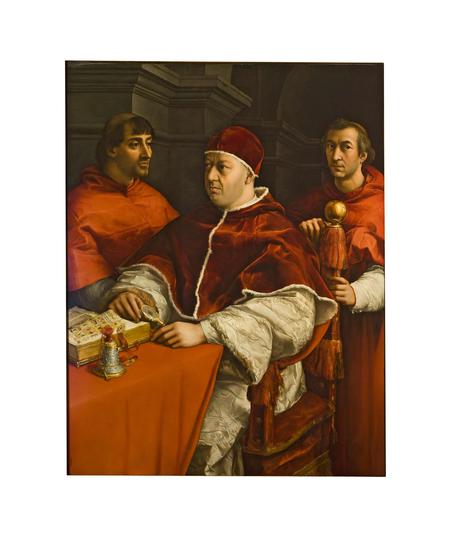 (ANSA) - Rome, February 25 - The scientific committee at the Uffizi resigned en masse Tuesday in protest at the Florence gallery's loan of a Raphael work to an unprecedented Rome show marking the 500th anniversary of the Renaissance master's death.
The panel said it had worked for months to draw up a list of works that should never be moved from the Florentine gallery, and the portrait of Pope Leo X was one of them.
The famed portrait was specially restored for the show in the capital by the experts at Florence's restoration works Opificio delle Pietre Dure.
In a letter to the bodies that appointed them, including the education ministry and Florence city council, Donata Levi, Tomaso Montanari, Fabrizio Moretti and Claudio Pizzorusso said the Leo X portrait should never leave Florence.
They said that Uffizi director Eike Schmidt had approved their decision on December 9 last year banning the transfer of the work.
Schmidt responded Tuesday by saying that the Leo X was "indispensable" to the Rome show.
"I stand by my decision to loan the work," he told ANSA.
The portrait will be one of the centrepieces of the show, called simply Raphael, at the Scuderie del Qurinale from March 5 to June 2.
"Today we learned from the press," the four experts said, "that the painting is already in the Rome exhibition space.
"We think that keeping us busy for months drafting lists which are then ignored undermines the very existence of the committee.
"We think that the mass resignation of the scientific committee of Italy's most important museum makes a rethink inevitable, and a redefinition of the role of the scientific committees in the management of autonomous museums".
The unprecedented exhibit on Raphael in Rome will crown global celebrations marking the 500th anniversary of the death of the genius from Urbino.
Over 70,000 tickets have already been booked or sold ahead of the opening on March 5 at the Scuderie del Quirinale exhibition space despite the fact that Italy is currently struggling to contain Europe's biggest outbreak of the novel coronavirus.
The show, which wraps up on June 2, will be the biggest ever monographic exhibition on the Renaissance master, featuring over 200 masterpieces including paintings and sketches as well as comparison works.
"It is the largest exhibit ever organized on Raphael", said Mario De Simoni, president and CEO of Ales Scuderie del Quirinale, during the show's presentation on Monday. Raphael died on April 6, 1520 at the age of 37.
The works in the show have never been gathered in the same place before.
The exhibit was organized in collaboration with Florence's Uffizi Gallery, which is sending several masterworks that have never been on display in Rome before. A total of 52 art institutions have contributed to the show, which was organized after three years of studies and restoration work - including one of the famed portrait of Pope Leo X - carried out by a team of art historians and curators including Marzia Faietti and Matteo Lanfranconi.
The show is entitled Raphael.
It will include the Madonna del Granduca and Woman with a Veil from the Uffizi; the Portrait of Baldassarre Castiglione and Self-Portrait with Friend from the Louvre and the Madonna of the Rose from the Prado.
It will offer visitors the opportunity to view art starting from Raphael's death and his monumental tomb in the Pantheon in Rome, with over 200 masterworks that have been insured for a record four billion euros.