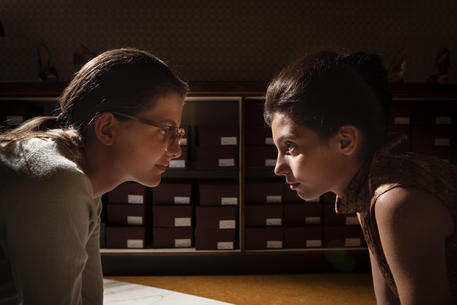 (ANSA) - Rome, January 24 - A new miniseries based on the second book in Elena Ferrante's bestseller series Neapolitan Novels will premiere on January 27-29 in movie theaters and on February 10 on the first channel of State broadcaster RAI.
The miniseries, inspired by Ferrante's The Story of a New Name (published in Italy by edition e/o), was screened for the first time this week for a select public at RAI's headquarters in Rome's Viale Mazzini.
The story resumes where it ended in the first eight-episode miniseries 'My Brilliant Friend'.
Lila (Gaia Girace) and Elena, called Lenù, (Margherita Mazzucco) are 16 and feel imprisoned in their lives.
While the first season focused on the pair's childhood, in the new series director Saverio Costanzo delves deeper into the girls' complex and changing bond throughout their journey of self-discovery as the two extraordinary girls become women.
Costanzo has co-written the screenplay with Ferrante and Francesco Piccolo.
Award-winning director Alice Rohrwacher has directed two out of the eight episodes of the new miniseries, those set on the island of Ischia.
The new TV adaptation was produced by Fandango, The Apartment and Wildside, part of Fremantle, in collaboration with Rai Fiction, HBO Entertainment and in co-production with Mowe and Umedia.
The series will air over four nights (with eight 50-minute-long episodes) on Rai1 and online on RaiPlay.
The first miniseries, which began airing in Italy in November 2018, was directed by Costanzo with Oscar-winning director Paolo Sorrentino as producer.
It gained a high audience and rave reviews for faithfully recreating the microcosm so masterfully designed by Ferrante, who has always protected her identity behind a pseudonym and who can boast over 10 million readers.
Ferrante became an international phenomenon with her four novels set in Naples: My Brilliant Friend (2012), The Story of a New Name (2013), Those Who Leave and Those Who Stay (2014), and The Story of the Lost Child (2015). The quartet explores the complexities of female friendship as it interweaves the tales of two women from their poverty and crime-stricken Naples childhood into adulthood against the backdrop of Italian postwar history.