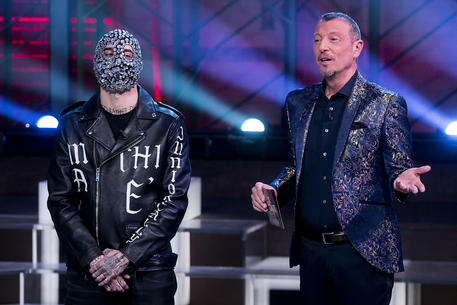 (ANSA) - Rome, January 20 - Controversy has broken out over the choice of rapper Junior Cally to compete in the big-name category at this year's Sanremo Music Festival.
In lyrics from his 2017 song "Strega Lyrics", the Roman rapper, 29, whose real name is Antonio Signore, uses vulgar and sexual language and describes killing a woman.
He was chosen by this year's Sanremo artistic director Amadeus.
On Saturday, 29 female members of the Lower House headed by Laura Boldrini sent a letter to the Italian Parliament's RAI Oversight Committee opposing the choice, followed by criticism on Sunday by the League and its leader Matteo Salvini, the 5-Star Movement, UDC, and Forza Italia.
On Sunday, Salvini tweeted about the approval, during his time as Deputy Prime Minister, of the Code Red law against domestic violence, and followed up with a tweet that said: "Speaking of which, I'm ashamed of that singer who compares women to whores, abused, kidnapped, raped and used as objects.
Do that at your house, not live on RAI and in the name of Italian music".
RAI director Marcello Foa called the choice of Junior Cally "unacceptable" and expressed "strong irritation for choices that go in the opposite of the hoped direction". "The Festival, much more so on the occasion of its 70th anniversary, must represent a moment of shared values, healthy fun, and national union, with respect for the mandate of public service," Foa said.
"Choices such as that of Junior Cally are ethically unacceptable for the overwhelming majority of Italians," he said.
Junior Cally's staff responded by saying that either the art of rap has to be accepted, or the Sanremo Festival becomes a "hypocritical showcase of do-gooders, far from reality and a branch of the Italian Parliament".
The row has garnered headlines in the Italian media.
The Sanremo fest is Italy's most watched TV event.