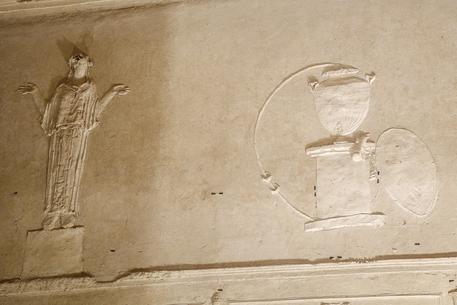 (ANSA) - Rome, December 10 - The so-called 'Basilica of the Mysteries' has been reborn in Rome.
The basilica, one of the most magical and mystery-shrounded underground locales in Rome, has been restored with funding from Swiss foundation Evergete.
The restoration has restored the whole northern wall of the lefthand nave, with its refined decorations, and the blazing whiteness of its stucco work mixed with mother of pearl.
The underground church is near Rome's major Porta Maggiore gate.
An intervention on the southern wall will soon be carried out.
According to some researchers the building, which dates back to the first century AD, was the tomb of a family, the Statili, close to Emperor Augustus.
For others, it was the site of mystery cults and neo-Pythagorean rituals.
All its measurements, in fact, have to do with the number three.
The latest studies by the Rome archaeological superintendency tend to confirm both theories, with one use being followed by the other.
In 2020 a new lighting installation will illuminate the internal stuccoes, while a 'didactic room' on the ground floor will allow visitors to see the decorations up close.
The operation presented on Tuesday regards 50% of the the restoration of the underground basilica.