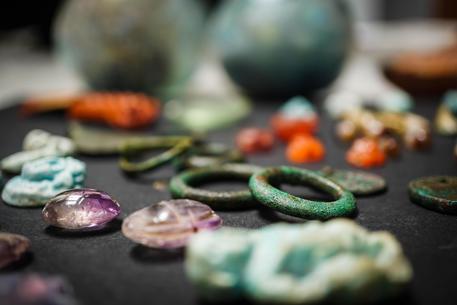 (ANSA) - Rome, August 12 - Archaeologists have uncovered a trunk at Pompeii containing a vast variety of fascinating objects that may have been part of a 'sorcerer's treasure trove' the site's director, Massimo Osanna, said on Monday in an ANSA exclusive.
The objects included crystals, amber and amethyst stones, buttons made of bones, beetles from the orient, amulets, dolls, bells, miniature penises, fists and even a tiny skull. They were found at the Casa del Giardino, the same area where an inscription was recently uncovered that made historians change the date of when they think the Vesuvius eruption that destroyed Pompeii took place, shifting it from August 24 to October 24 79 AD.
"There are dozens of good luck charms next to other objects that were attributed with the power of crushing bad luck," Osanna told ANSA, adding that he thinks that it is more likely that the objects belonged to a servant or slave than the owner of the house. Indeed, the chest did not include the gold that the all the wealthy people of Pompeii loved to wear. "They could have been necklaces that were worn during rituals rather being used to look elegant," said Osanna. The experts say the objects may have been used in rituals for fertility, seduction, or to seek good omens for a birth or pregnancy, while stressing that this is just a hypothesis.