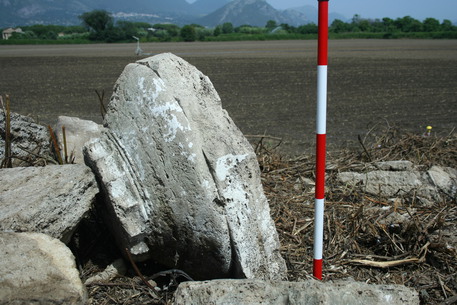 (ANSA) - Naples, June 13 - A Doric building believed to date back to the sixth or fifth century BC has emerged at the famed ancient Greek site of Paestum near Naples after thick undergrowth was cleared.
Archaeologists discovered capitals, columns, cornices and other features on the building.
The most surprising feature is a panel, probably a so-called metope, in sandstone decorated with three bas-relief rosettes, similar to others at Paestum and the surrounding area.
Paestum was a major ancient Greek city on the coast of the Tyrrhenian Sea in Magna Graecia (southern Italy).
The ruins of Paestum are famous for their three ancient Greek temples in the Doric order, dating from about 600 to 450 BC, which are in a very good state of preservation. The city walls and amphitheatre are largely intact, and the bottom of the walls of many other structures remain, as well as paved roads.
The site is open to the public, and there is a modern national museum within it, which also contains the finds from the associated Greek site of Foce del Sele.