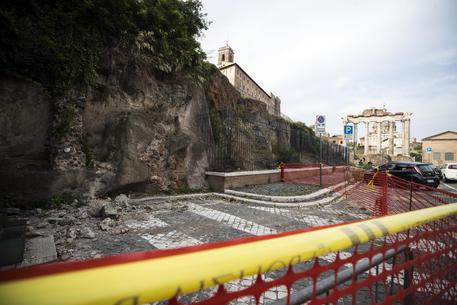 (ANSA) - Rome, June 6 - Gucci is to fund a two-year 1.6 million euro restoration of the Tarpeian Rock, the cliff ancient Romans threw traitors off.
The fashion house on Thursday unveiled the partnership with the Capitoline Superintendency, entitled 'Tarpeian Rock, Between Legend and Future'.
It is the latest such partnership in the Eternal City, where Fendi funded the restoration of the Trevi Fountain and Bulgari that of the Spanish Steps in recent years.
Last August 31, stones and earth fell off the famed rock in Rome in what officials called a "mini-landslide".
The Tarpeian Rock is a steep cliff on the southern summit of the Capitoline Hill, overlooking the ancient Roman Forum.
It was used during the Roman Republic as an execution site.
Murderers, traitors, perjurors and larcenous slaves, if convicted by quaestors, were flung from the cliff to their deaths.
The cliff was about 25 meters (80 ft) high.
"I thanks Gucci for this act of love towards the city," said Mayor Virginia Raggi.
"The Tarpeian Rock will return to life and, thanks to the splendid setting of the Roman Forum and the Colosseum, will become a unique and evocative place to host important cultural and artistic events".
The project will, among other things, restore gardens that have long been closed to the public.