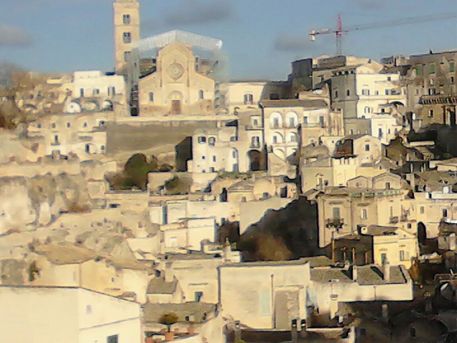 (by Francesca Pierleoni).
(ANSA) - Rome, May 28 - Over 36 years ago, Brian Eno wrote the soundtrack for Apollo - renamed For All Mankind for its 1989 release - Al Reinert's documentary on the first missions to the moon, with his brother Roger and Daniel Lanois.
The documentary was nominated for an Oscar.
And fifty years after the first moon landing, the soundtrack will be the star in Matera, the European capital of culture, of a multimedia concert on July 18, 'Apollo soundtrack', starring British band Icebreaker with Roger Eno, steel guitarist B.J.
Cole and Irish cellist Gyda Valtysdottir. Brian Eno may also perform.
Satellite mages provided by Matera's Space Center will be screened during the concert.
The images will be at the center of a show in September called 'Mediterranea'.
"I can't wait to play in Matera", Brian Eno's younger brother Roger said on the phone.
Brian Eno has also written the soundtrack for films including 9 weeks and Trainspotting.
"I'm in my studio doing music during a very sad day for Britain, and not just for the climate.. Sorry for Brexit", he said.
The concert, which will be performed for the first time outside Great Britain, "will last a total of two hours and it will be accessible with a passport of temporary Matera citizenship, which allows to participate in all events in Matera in 2019 for 19 euros", said Paolo Verri, the director of the foundation Matera Basilicata 2019.
"It will be an opportunity to pay homage to Rocco Petrone, the son of migrants from Lucania (Basilicata), who supervised NASA launches and the entire Apollo Program".
James Poke is the co-founder of the Icebreaker, the music ensemble with 12 members who have already performed the Apollo Soundtrack in the re-arranged version by South-Korea's Wujun Lee, the composer chosen by Brian Eno.
He said that "interaction between space, science and music is very interesting".
Poke announced that the band is in talks with the Dutch space agency "for a project for next year".
"Many think science is different from artistic expression but it's not like that, the same discipline, creativity and imagination are necessary", he concluded.