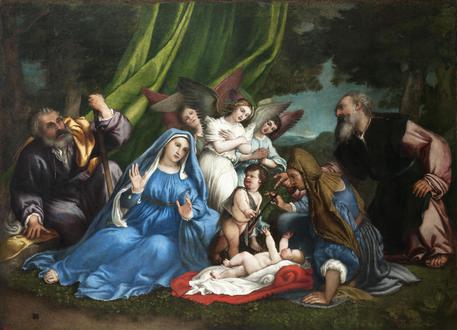 (ANSA) - Ancona, February 7 - Eight small exhibitions accompanying an art show in Macerata on Italian Renaissance painter Lorenzo Lotto have drawn significant visitor numbers, in some cases 70% or even double.
The main exhibition, titled "Lorenzo Lotto: The Call of the Marche", is being hosted at Palazzo Buonaccorsi in Macerata.
Works from around the world were loaned out for inclusion in the exhibition.
Some of these works were also spread around to eight other "Lotto centres" in museums and churches that make up part of the overall show in the Marche region.
Lotto died in the town of Loreto between 1556 and 1557, where one of the eight additional centres is located.
The other centres are in Ancona, Urbino, Jesi, Recanati, Monte San Giusto, Mogliano, and Cingoli.
In Monte San Giusto stands Palazzo Bonafede, one of the most important examples of Renaissance architecture in the Marche, together with Palazzo Ducale in Urbino.
In the town's St. Mary in Telusiano Church, an alterpiece by Lotto titled "Crucifixion" (ca. 1529-1530), in its original frame, is an impressive display of Renaissance woodworking.
In Mogliano, a small residential centre with an 18th-century feel, the Museum of Sacred Art (MASM) contains Lotto's "Pala dell'Assunta", also known as "Madonna in Glory with the Angels and Saints John the Baptist, Anthony of Padua, Mary Magdalene and Joseph".
In Cingoli, the so-called "balcony of the Marche" for its splendid scenic views, there is the "Madonna of the Rosary", temporarily on display in the Sala degli Stemmi at the Palazzo Comunale.
Urbino needs no introduction, as a UNESCO World Heritage site and the birthplace of Raphael, it is one of the most beautiful Renaissance centres in Italy.
Among the many things to see, there is the Palazzo Ducale with the National Gallery of the Marche, containing valuable paintings by Piero della Francesca, Laurana, Raphael, and also Lotto's 1549 work "Saint Rocco", which came from the Posatora Church in Ancona and was purchased by the State in 2007.
There are five works by Lotto in Jesi, located in the municipal art gallery in Palazzo Pianetti, where the town's civic museum is housed.
The works were created between 1512 and 1539 for local churches, and include an altar piece titled "The Deposition"; two wooden paintings, "The Angel of the Annunciation" and "The Virgin of the Annunciation"; the "Madonna of the Roses", and the famous "St. Lucy" altarpiece, one of Lotto's iconic masterpieces.
In Recanati, the "Annunciation" altarpiece is also iconic, located in the Villa Colloredo Mels civic museum along with a group of extraordinary works by Lotto.
The young masterpiece known as the "Recanati Polyptych" of 1508 is there, along with the "Transfiguration of Christ", which was influenced by Raphael but with an anti-classic style, and the devotional wood painting "St. James the Greater".
Finally, the "Recanati Annuncation", depicting a room with God the Father seeming to literally dive out of the heavens; the angel, frightened by the enormity of what is happening; a cat fleeing; and Mary, turned towards the viewer, who seems to want to do the same, but knows there is no escape.
Ancona, capital of the Marche, is also a place of Lotto, historically linked by relations with Venice and with the other shore of the Adriatic.
In the municipal painting gallery, among the masterpieces by Titian, Crivelli, Andrea Lilli, Sebastiano Del Piombo, and Francesco Podesti, there is also the "Sacred Conversation" by Lotto, also known as the "Altarpiece of the Halberd", commissioned in 1538 for the Church of St. Augustine, with extraordinary chiaroscuro effects.
A few hundred metres away, in the the church of San Francesco alle Scale, there is the "Assumption" altarpiece, painted in 1550.
Finally, there is the Gothic-style Loggia dei Mercanti, where in 1550 a lottery was held to sell Lotto's paintings.
In Loreto, since the Middle Ages the site of the Sanctuary of the Holy House, there are seven works created for the ancient Coro Chapel, also known as the German Chapel.
Some of the works there were completed in the last years of Lotto's life, including the "Adoration of the Wise Men" and the "Presentation of Jesus in the Temple", known as his final works.
Another large painting by Lotto, "St. Christopher with Child and Saints Rocco and Sebastian" (ca. 1532-1533) can be seen in the Basilica of the Holy House, where it was relocated in July 2018 after a conservation effort.
photo: Adoration of the Baby Jesus (1549-55)