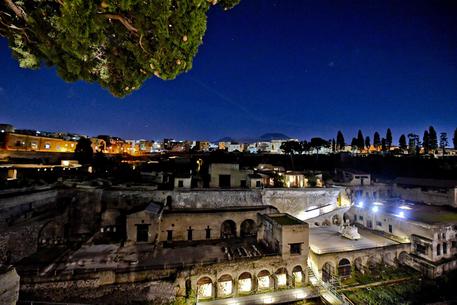 (ANSA) - Herculaneum, January 16 - The archaeological park at Herculaneum, the ancient sister city of Pompeii, has several new initiatives and changes in store as the new year begins.
The site saw a 9% increase in visitors over the past year, according to figures released by the park's administrators, for a total of 534,328 visitors compared to 490,030 in 2017.
Park administrators announced several new developments for this year, including the permanent opening of the ancient theatre, exhibitions throughout the area, "archeo-aperitif" events that combine educational seminars with tastings, and restoration work on the site's domus.
The park plans to collaborate more extensively this year with schools and institutions in the area, including Vesuvius National Park and the Foundation of Vesuvian Villas.
"The 2019 programme establishes some openings permanently, such as the theatre; presents a summer review that will be more structured and richer than last year; welcomes residents and enthusiasts for a conference cycle and a summer school," said park director Francesco Sirano.
"It opens the park to exhibitions throughout the area, in continuing the strategy of collaboration with area institutions, as well as schools, associations, and national and international institutions so that everyone can enjoy the growth of this UNESCO site, which must become common and shared," he said.
One of the pre-established goals is to complete the overall restoration of the domus and renew conservation programmes so that the site never again finds itself in the conditions it was in before 2002.
The park will enact a project to stabilise the area of the Villa of the Papyri as well as another area, in collaboration with the City of Herculaneum and the Packard Foundation, to connect the ancient city with the modern one.
This project includes knocking down a wall on via Mare and replacing it with a much more well-ventilated type of protection, in order to make the road a strategic point between the ancient theatre and the used clothing market on Via Pugliano. There will also be summer evening programmes as well as free afternoon openings and the traditional free first Sunday openings as part of the #domenichealmuseo initiative.