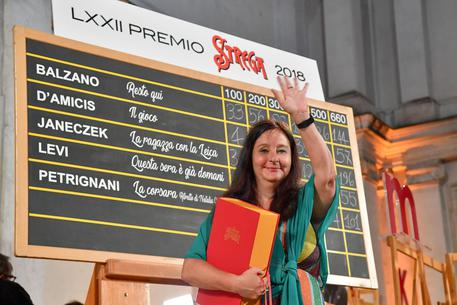 (ANSA) - Rome, July 6 - Helena Janeczek has won the 2018 Strega book prize, one of Italy's most prestigious literary awards, with her novel 'La Ragazza con la Leica' - The Girl with the Leica, published by Guanda.
Janeczek, who prevailed with 196 votes, was the first woman to be awarded the prize in 15 years after Melania Mazzucco won with Vita in 2003.
The book is a biography of Gerga Taro, who became the first female war photojournalist to die on assignment in 1937 during the Spanish Civil War.
The Jewish émigré from Nazi Germany was 26 and had just begun making a name for herself while helping launch the career of Robert Capa.
German-born Italian author Janeczek, 54, said she is unlike Taro.
"It was beautiful to test myself with a different figure.
"She was born courageous while I learned how to bring it out - she helped me over the six years I spent writing the book", she said, expressing the hope "it won't take 15 more years for the victory of another woman".
Guanda won the literary prize for the first time.
Marco Balzano's Resto Qui (I Stay Here, Einaudi) was second with 144 votes, followed by Sandra Petrignani's 'La Corsara.
Ritratto di Natalia Ginzburg' - The Privateer. Portrait of Natalia Ginzburg, Neri Pozzi - which won 101 votes.
Carlo D'Amicis' Il Gioco - The Game, Mondadori - garnered 57 votes and Lia Levi's Questa Sera E' Già Domani - Tonight is Already Tomorrow, Editzoni E/O - obtained 55.
Last year's winner Paolo Cognetti served as the jury's president.
The name Strega, which means witch in Italian, refers to the prize's sponsors, producers of the famed yellow liqueur of the same name.