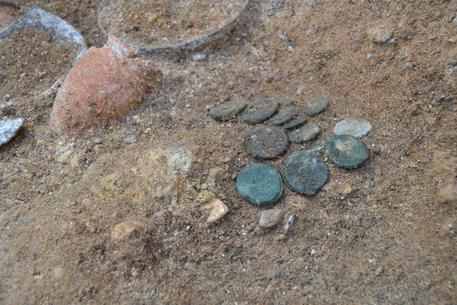 (ANSAmed) - ROME, JULY 3 - An exceptional discovery was made at the Vulci archaeological site, where a treasure of coins from the 3rd century B.C. was found intact, according to a statement from the site's scientific department.
The discovery included 15 large bronze coins, which were likely originally stored in a leather bag.
They were found above the closing tile of a burial site together with an iron strigil (a tool that was used to clean the body) and numerous ceramics, all clearly part of a funeral ritual for two deceased.
One of those buried there, who was male, had another coin similar to the others placed on his left shoulder together with a bronze clasp, along with other objects in iron and ceramics that completed the burial kit.
His death may have been the result of an iron object, possibly a spear, found near the skull.
The second of the two buried there was cremated and the incinerated bones were wrapped in a shroud that was likely closed with a bronze clasp that was found next to it and was nearly identical to the other. Other objects were found in the vestibule of the tomb together with another burial, including a small circular pyx (chalice) with a lead cover.
The coins are part of the first Roman issue and have the prow of a boat on one side and the image of the god Janus Bifrons on the other, representing the passage of the dead from the world of the living to the underworld.
Carlo Casi, the scientific director at the Vulci Foundation, said the discovery is part of "extensive and systematic investigations" that have been underway for years at the Poggetto Mengarelli necropolis.
"More than 100 tombs have been excavated, dating between the middle of the 8th century to the 2nd century B.C.," Casi said. "In this specific case, the study of the context is interesting, because it allows us to better define the social continuity between the Etruscans and the Romans, following the conquering of Rome that took place in 280 B.C.," Casi said.
The excavations took place in a collaboration between the Superintendency for Archaeology, Fine Art and Landscape for Metropolitan Rome; the province of Viterbo and Southern Etruria; the Vulci Foundation; and the City of Montalto di Castro.(ANSAmed).