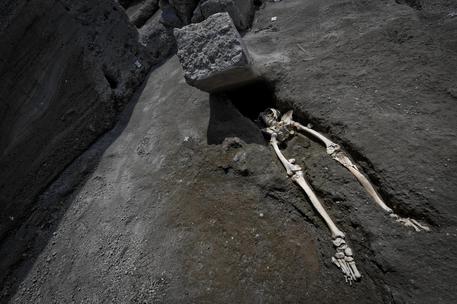 (ANSA) - Rome, June 28 - The head of Pompeii's last fugitive has been found, Pompeii Archaeological Site Director Massimo Osanna told an ANSA Forum on Thursday. "We have just found the skull too, with the mouth open wide in an amazing way", he said. Osanna also revealed that early suggestions the victim had had his head knocked off by a large rock were wrong.
"He did not die of heat shock or because of the rock that fell on him, but from suffocation," Osanna told the forum.
The rest of the skeleton was found at the end of May.
The 35-year-old man, with a limp, was hit by a pyroclastic cloud while, forced to linger by his physical defect, he turned to look at Vesuvius.