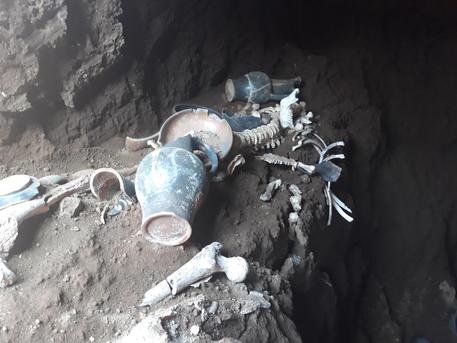 (ANSA) - Rome, June 1 - An "exceptional" tomb dubbed The Athlete's Tomb, found in exactly the same condition it was left 2,000 years ago, has been discovered outside Rome in the Case Rossse area during an aqueduct extension excavation, sources said Friday. Rome archaeologists also called it the tomb of the strigils, the instruments used for cleaning olive oil off sweaty bodies. Four skeletons, of three men and a woman, were found in the tomb with their ceremonial burial accoutrements, archaeologists said.
Archaeologists said they had been lucky to find the tomb intact since it lay relatively close to the surface, only two metres below the field where it was found.
The bodies were accompanied in their last journey by splendid black-painted ceramic works, some decorated with vegetal and geometric motifs, a coin in bronze alloy with the helmeted head of Minerva and the word "Romano" on the back, as well as plates with the remains of food offerings including rabbit, chicken and goat, and two iron strigils, used by athletes to clean themselves after sweaty physical activity.