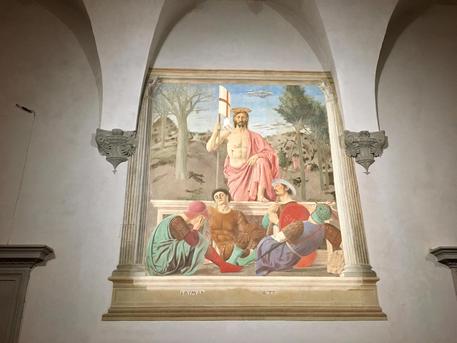 (ANSA) - Sansepolcro (Aresso), March 26 - After a three-year-long restoration, Renaissance master Piero della Francesca's Resurrection can once again be admired in its original glory at the civic museum of Sansepolcro, the little Tuscan town where the artist was born sometime around 1420.
The details and colors that make up the masterpiece have been brought back to life - the eyes of Jesus Christ, the draping of his pink cloak, the soldiers at his feet and the hills and fortresses against a clear blue sky on the background.
The fresco described by Giorgio Vasari, the father of modern art history, as the Renaissance pioneer's "most beautiful" artwork and hailed by British novelist Aldous Huxley in 1925 in the essay "The most beautiful painting in the world", is a symbol of Sansepolcro. Indeed gunnery officer Anthony Clarke in 1944 famously decided at the last minute not to bombard the town because he remembered about the masterpiece he would otherwise have risked destroying.
The long restoration work was carried out by Florence's Opificio delle Pietre Dure, one of Italy's most well-known restoration laboratories, and the art superintendency of Arezzo and Siena, with a 100,000 euro donation from Buitoni manager Aldo Osti.
The restoration saved the fresco from damage caused, among other things, by earthquakes, an exhaust pipe and 40 previous minor restorations including one in the 19th century in which sodium hydroxide was used to "clean" the painting.
It also unveiled new details of the fresco's history.
Cecilia Frosinini, director of the Opificio's department for the restoration of painted murals, said that, following the work, "we can affirm with certainty what has been said for a long time: the painting was moved here from somewhere else, perhaps even from an external wall of the building".
"It is one of the oldest and most monumental" relocations of a fresco in the history of art, Frosini said, adding that moving it to its current location where the town meetings were held was an "identity choice". The restoration also shed new light on the artist's technique and color choices.
"Today we know that the greens are the weakest" hues while the pink of the cloth worn by Jesus was intended to be "richer", noted Frosini.
The director of the restoration work on behalf of the superintendency, Paola Refice, also said it is necessary to ensure "ordinary maintenance work" for the fresco.
"An artwork should never require such a significant intervention ever again".
Nevertheless, a few questions on the masterpiece remain unanswered.
Art historians have often dated the fresco between 1450 and 1465 but new research has shifted the date to 1470.
The original location and reason why it was moved are still unclear.
And the mystery on whether the sleeping soldier represents Piero della Francesca remains unanswered.